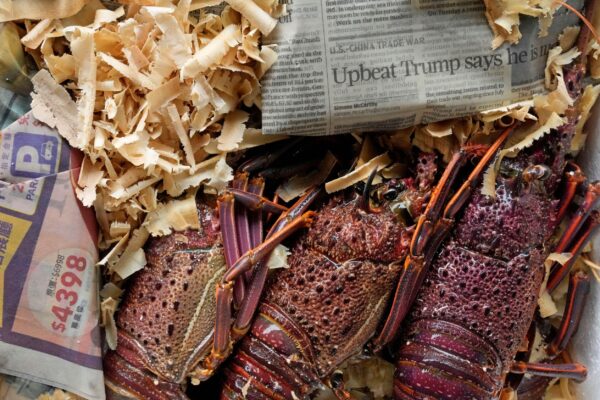 A new market for Australian lobster has opened after a trade deal between Australia and India passed the Australian parliament on Nov. 22.

This follows a trade war with Beijing that saw Lobster, and other commodities, fall to a grinding halt in 2020 after an investigation into the origins of COVID-19 was pursued by then Prime Minister Scott Morrison.

Under the India-Australia Economic Cooperation and Trade Agreement (ECTA), which was signed between the two countries on April 2 and ratified in the Australian parliament on Nov. 22, tariffs of up to 50 percent on 90 percent of Australia’s goods exports to India will be removed, these include seafood, meat, nuts, cotton and wool.

The trade agreement will “enter into force 30 days (or another mutually agreed time) after the respective parties have confirmed in writing that they have completed their domestic requirements,” according to a statement by Australian minister for Trade and Tourism, Don Farrell.

“These agreements will support our businesses to grow, to offer more employment opportunities, and will give Australian consumers more choice at the checkout,” Farrell said.

Among the first companies to send lobster to India will be the Geraldton Fishermen’s Cooperative, Western Australia’s biggest lobster exporter.

The company will send over a “modest” amount of lobster, which is expected to be used in high-end restaurants and hotel chains, reported the Australian Broadcasting Corporation (ABC).

The 30 percent tariff on frozen lobster products and other seafood will be removed over seven years.

In 2019 and 2020, China accounted for around 91 percent of Australian rock lobster exports and bought in approximately AU$1.6 billion (US$1 billion) annually for the industry.

But from November 2020, the resultant collapse in export demand and limited opportunities for alternative markets resulted in the production value of rock lobster falling in 2021-2022 to AU$380 million, according to statistics from the Department of Agriculture, Fisheries and Forestry (ABARES).

The decline has resulted in production value falling to around 50 percent of its pre-pandemic level,” the department’s website states.

“Disruptions in the China market and the closure of the global hospitality sector because of COVID-19 have affected rock lobster exports. This led to an overall reduction in Australia’s rock lobster harvest and lower prices for exported rock lobsters,” the Austrade website states.

Beijing previously said its trade sanctions on Australian beef, wine, barley, timber, and coal, were due to poor quality control and pests, or other non-political reasons.

However, Chinese e-commerce platforms and wet markets were circumventing Beijing’s ban on Australian lobster by moving the Australian goods to Hong Kong and then into Mainland China via waterways through what is known as “grey trade.”

For instance, in July 2021, Chinese police seized 100 boxes—weighing 1,274 kg—containing the famous Western Rock Lobster. The street value of the crustacean was estimated to be US$46,500, according to the South China Morning Post.

A spokesperson for the Chinese Communist Party’s (CCP) Ministry of Foreign Affairs, Zhao Lijian said in July 2021 that the communist government would not allow any country to “reap benefits” from doing business with China while “groundlessly accusing and smearing” and “undermining China’s core interests based on ideology.”

Other Markets for Australian Lobster

This was despite lower demand for premium food products due to COVID-19.

Korea was also another market where Australian Lobster was promoted by Austrade.

The India-Australia trade agreement is expected to increase bilateral trade to about US$45-50 billion in the next five years—this is from the existing US$31 billion.

The two countries are also working to conclude an “ambitious Comprehensive Economic Cooperation Agreement” that will build on ECTA.

Further, India’s 150 percent wine tariff will be slashed for Australian wine over US$5 per bottle.

“The Australia-India Economic Cooperation and Trade Agreement (ECTA) is a great opportunity for Australian businesses as it will open up new markets to reach around 1.4 billion consumers in the world’s fastest-growing major economy,” according to Australia’s trade minister, Dan Farrell.

The Australian Trade and Investment Commission and Geraldton Fishermen’s Cooperative have been approached for comment.

Henry Jom is an Australian based reporter covering local Australia news.
Contact him at [email protected]

SO FAR 2022 has sadly seen many beloved celebrities pass away. Here we remember the iconic stars who are no longer with us. Which celebrities have...
Read more
Business

Lampeter and Tregaron to lose bus service to Aberystwyth

Rural bus services are under threat, with the 585 facing a very uncertain future on 1 January – bad news for people living between...
Read more

SO FAR 2022 has sadly seen many beloved celebrities pass away. Here we remember the iconic stars who are no longer with us. Which celebrities have...
Read more
Business

Lampeter and Tregaron to lose bus service to Aberystwyth

Rural bus services are under threat, with the 585 facing a very uncertain future on 1 January – bad news for people living between...
Read more
United Kingdom

Throwback to his epic trolling celebration v Dallas Cowboys in 2000

Rishi Sunak is facing a Conservative rebellion with disaffection growing within the party, according to reports.MPs on the right of the party have warned...
Read more
Load more
Facebook
Instagram
LinkedIn
Pinterest
Tumblr
Twitter