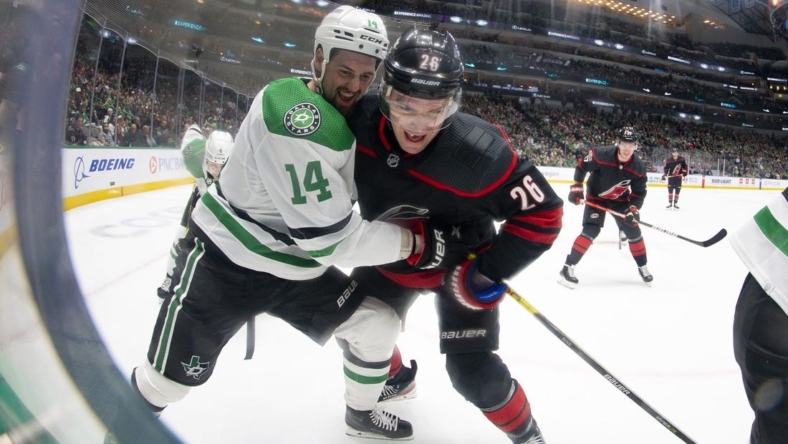 Martin Necas scored the overtime winner to give the Carolina Hurricanes a 3-2 road victory over the Dallas Stars on Wednesday.

At 1:34 of the extra frame, Necas took the puck in the circle and maneuvered his way into the slot, then fired a shot past Stars goalie Jake Oettinger for the deciding score.

It was Necas’ 19th goal of the season, and his second OT winner against the Stars. Necas was also the hero in Carolina’s previous meeting with Dallas, a 5-4 overtime win on December 17.

The Metropolitan Division-leading Hurricanes have won three consecutive games, and are 5-0-1 in their last six outings.

The Stars have suffered two straight non-regulation losses, after dropping another 3-2 overtime result to the Buffalo Sabres on Monday.

Antti Raanta stopped all 15 shots faced in a relief effort. Frederick Andersen started the game for Carolina and allowed two goals on six shots, but left the game during the first intermission due to an upper-body injury.

Wyatt Johnston and Jason Robertson scored for the Stars.

Aho opened the scoring with his 200th NHL goal, and the milestone came in short-handed fashion 8:46 into the first period. During a Stars power play, Aho grabbed a loose puck and raced in for a breakaway marker.

Since the start of the 2018-19 season, Aho leads all NHL players in short-handed goals (15) and points (20). The Hurricanes are among the league leaders with eight short-handed goals this season, and six of those tallies have come in the last 11 games.

Johnston and Robertson scored to put Dallas ahead before the first period was over, and Burns then equalized on a well-placed top-corner shot at 4:55 of the second period.

Burns’ tally was the last goal of regulation, as both teams had narrow misses. Johnston hit the post on a great chance in the third period, while Oettinger made a pair of late saves to rob Brady Skjei and Andrei Svechnikov.