Yankees’ Matt Carpenter wants to be available for playoffs 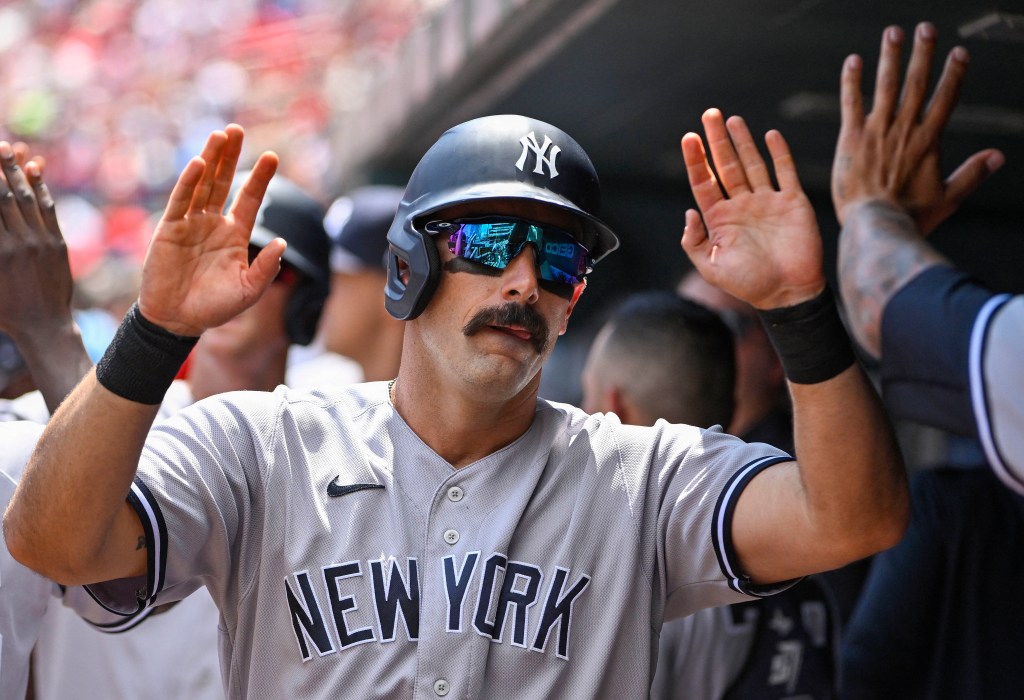 Matt Carpenter still plans on playing in the playoffs, despite not being fully healed from the fractured left foot he suffered in August.

“Regardless of what the scan says, I want to be available for the postseason,’’ Carpenter said Wednesday before the Yankees’ 14-2 blowout win over the Pirates. “Even if it’s in a pinch-hit capacity, kind of like the role when I first got here.’’

Carpenter got an X-ray on Tuesday, which showed some healing, and Aaron Boone said he was due to get another one in another week or so.

For now, Carpenter is able to do some things without a walking boot and he’s standing in on bullpen sessions.

Even if he’s not able to get any game at-bats before the playoffs, Carpenter is confident he can contribute, like he did when he came to the Yankees from his home in Texas following his release by the Rangers in May and immediately produced, becoming one of their most dangerous bats.

“I’m not worried about that,’’ Carpenter said. “I know what I need to do to get ready for whatever the situation is. … If they want me to be a left-handed bat off the bench, that’s what I’m gonna do.”

Like Carpenter, Andrew Benintendi is also trying to get back from a bone fracture in time to play in the playoffs, with Benintendi having suffered a fracture of the hook of his hamate bone.

Benintendi is also under the weather, as is Aaron Hicks, who was briefly in the clubhouse prior to Wednesday’s game, but hasn’t played in either of the last two games. Hicks recently took issue with his playing time and figures to be used less frequently with Harrison Bader now the starting center fielder.

DJ LeMahieu took batting practice on the field again on Wednesday as he and the Yankees try to determine the best way to get the injured infielder back and effective before the end of the season.

LeMahieu has dealt with right toe inflammation for much of the second half, which landed him on the IL this month.

Boone said LeMahieu likely wouldn’t return to 100 percent this year, since he’ll need more time to rest before that can happen.

“It’s a tricky situation,’’ Boone said. “When do you dive all-in, letting it rip and does [it cause] a setback? I don’t really have that answer. Eventually, the rubber’s gonna hit the road and we’re gonna find out. We’ve got to continue to progress to get there.”

Asked if LeMahieu would be fully healthy by the end of the year, Boone said, “Probably not.”

With the anticipated return of Scott Effross from the IL on Thursday, right-hander Greg Weissert was optioned to Triple-A Scranton/Wilkes-Barre after he pitched a scoreless ninth in Wednesday’s victory. The Long Island native and Fordham University product has pitched 10 ¹/₃ innings out of the bullpen for the Yankees. Miguel Andujar was optioned to Triple-A Scranton/Wilkes-Barre on Wednesday to open a roster spot for Luis Severino.

When Aaron Judge and Giancarlo Stanton both went deep in the bottom of the ninth of Tuesday’s win, it was the 25th time the two have homered in the same game. The Yankees have gone 24-1 in those games, including 11-0 this season.

Foster Moreau is healthy and dominated early against the Titans in the Raiders’ 24-22 loss in Nashville. While the stat line (three catches for...
Read more