Why the Tampa Bay Buccaneers are the Green Bay Packers’ kryptonite 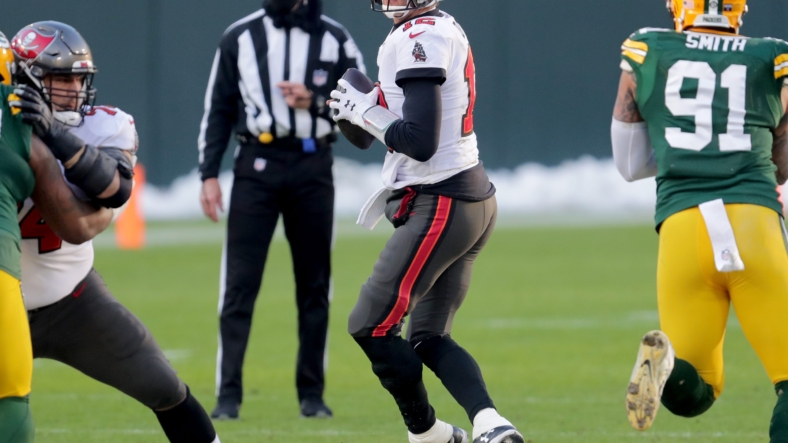 The Green Bay Packers will be marching down to Tampa Bay to face the Buccaneers on Sunday in a clash of NFC powers. This figures to be one of the great matchups of the 2022 season. Obviously, Aaron Rodgers against Tom Brady will steal the headlines.

But this is a massive matchup because it is the first time these two teams are meeting each other since the 2020 season when Tampa defeated Green Bay twice, incuding when they faced off in the NFC Championship Game. That season proved how much of a threat Tampa Bay was to Green Bay. They are a physical team with very few weaknesses. They have arguably the best defense in football plus TB12. Read on to find out why Tampa Bay is Green Bay’s kryptonite.

The front seven of Todd Bowles’ defense might be the best in all of football. Vita Vea and free agent addition Akiem Hicks, who Green Bay won’t have to face this time around (foot injury), create an absolute force on the interior. Shaq Barrett is the sack master on the outside. Devin White and Lavonte David are one of the fastest and most stout linebacking duos in the entire league. The defensive backs are headed by Pro Bowl safety Antoine Winfield Jr. plus cornerbacks Carlton Davis III and Jamel Dean.

This defense led by Todd Bowles, who is now the head coach, is elite. From top to bottom, they very well could be the best defense in football. It is very difficult to make a strong case against it. They will have to be exactly that with injuries they have sustained to their offense with Chris Godwin and the suspension to Mike Evans.

The Green Bay Packers need to be at their best

If there was ever a time for Green Bay to beat this Tom Brady-led team on the road, it would be Sunday. No Mike Evans. No Akiem Hicks. Banged up offensive live. This is an early-season measuring stick game for the Packers.

When Green Bay faced Tampa Bay twice in 2020, Aaron Rodgers was picked off a total of three times and was sacked a total of nine times. Luckily, the team got Pro Bowl guard/tackle Elgton Jenkins back from injury Sunday night. Also, All-Pro tackle David Bakhtiari could return to game action on Sunday. He did not play against Tampa in the NFC Championship Game that season. So it appears as if the Packers could have a better offensive line this time around. They will absolutely need their group to be better because Tampa is going to be bringing pressure.

With a healthy offensive line, look for the run game of Green Bay to be quite successful. Aaron Jones and A.J. Dillon combined for 194 yards on the ground against Chicago on Sunday night. Also, Rodgers should have good protection, which means the Packers should have a balanced attack through the air. The way to beat this Tampa defense through the air is with a collective effort.

On Sunday night against Chicago, Rodgers found eight different receivers, and no one had more than three receptions. If they try to force-feed one receiver, Tampa will eventually catch on. Coach Matt LaFleur and his four-time MVP have to be one step ahead of Todd Bowles for the whole game.

Green Bay needs to take advantage of Tampa missing key players. If they can find a way to manage the clock, run the ball well, play great defense, and let Rodgers do his thing, they should take this one. If they do indeed win this game, the entire NFL will be on notice. An unpredictable team, in a good way, with Rodgers at quarterback is something that has not been seen in a long, long time. It might just be the perfect recipe for success.

Related: Tom Brady or Aaron Rodgers? Debating the greatest quarterback of all time

Sir Keir Starmer opened his speech at the Labour Party conference by telling members it is a ‘fresh start’ under his leadership. The Labour leader...
Read more
Health