Why snowy owls are scarce in Michigan this winter 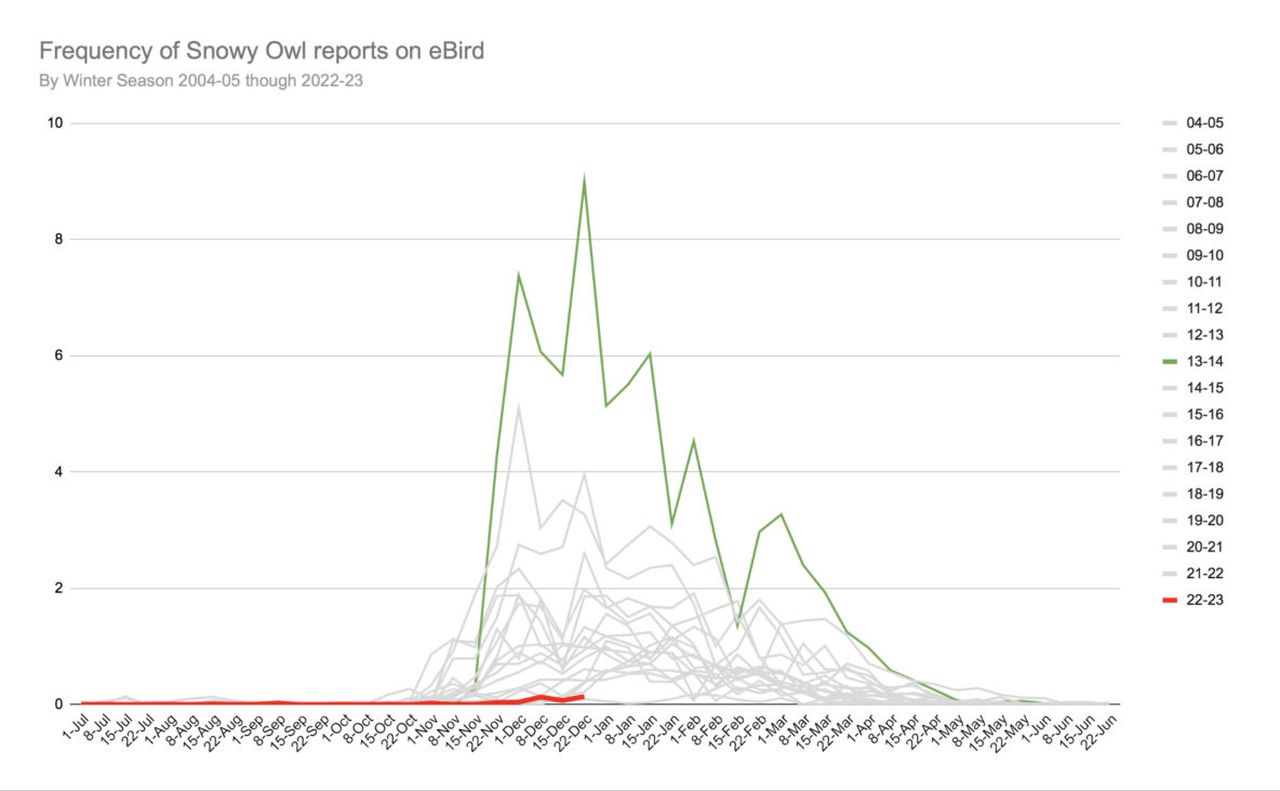 Snowy owl sightings in Michigan are always cause for excitement — the huge white birds with piercing yellow eyes are undeniably captivating — but when one appeared on a parking lot picnic table in Muskegon earlier this month, she literally stopped traffic.

Drivers in passing cars halted to snap cell phone photos, and pedestrian onlookers stood at a safe distance to marvel at the striking bird. In a region that is accustomed to hosting snowy owls every winter, this was the first time a snowy had been spotted in weeks.

That same scarcity has been true for Michigan as a whole this season.

According to Project SNOWStorm, a crowd-funded snowy owl research project, this winter has been “remarkably slow” across the Midwest and Northeast when compared with previous snowy owl seasons. Regional data from the website eBird offers further insight, showing that there have been about 50 snowy owls reported in Michigan this winter compared to last winter’s nearly 200.

Michigan is one of the places in the Northern U.S. where snowy owls migrate in early winter after spending the summer nesting in the Arctic. While the birds typically favor the eastern Upper Peninsula and northern Lower Peninsula, they can potentially appear anywhere in the state, hunting open spaces like fields and shorelines until the season wanes, sending them back north.

So where did all the snowies go this year? It turns out there may be several answers to this winter mystery.

To begin with, researchers have noted that snowy owls had a tough breeding season in the tundra. In parts of Canada and Alaska, where the owls hatch and raise their young, very few successful nests were reported this past year.

Experts say that was likely due to a drop in the population of snowy owls’ favorite food source: lemmings, a small Arctic rodent that accounts for up to 90% of the owls’ summer diet.

“In a nutshell, snowy owls generally only successfully breed when small mammal (primarily lemming) populations are at a peak,” Project SNOWstorm’s co-founder Scott Weidensaul told MLive via email. “Summer 2021 was such a year in several parts of the central and eastern Canadian Arctic, and last winter we had a strong flight of young snowies coming south, the product of that breeding season.”

Summer 2022, however, was an “off year” for the these cyclical rodents across much of the Canadian Arctic, Weidensaul continued, resulting in little to no snowy owl breeding and a “very poor winter flight.”

RELATED: It’s snowy owl season in Michigan: What you should know to help these Arctic beauties

In addition, some snowy owls may have been impacted by the highly pathogenic avian influenza, or HPAI, that tore through North American bird populations last year. HPAI primarily sickens or kills domestic poultry and waterfowl, but can also affect raptors like eagles and hawks, as well as owls.

“We know that quite a few snowy owls were confirmed dead from HPAI in New England and elsewhere,” Weidensaul wrote in a blog post earlier this month.

Snowy owl numbers are also generally on the decline, having recently been found to be among 90 North American bird species that have lost half their populations in the past 50 years. While not federally endangered in the U.S., the species is on the U.S. Fish and Wildlife Service’s Birds of Conservation Concern List, and has been listed as Vulnerable, or considered to be facing a high risk of extinction, by the International Union for Conservation of Nature.

Still, this winter researchers and birdwatchers alike are finding solace in the fact that snowy owls are subject to sporadic boom or bust migrations. In a phenomenon known as an irruption, larger-than-usual numbers of northern birds, including owls, will flock into the Northeast and Midwest some winters, while other winters we see far fewer.

“…we shouldn’t lose sight of the fact that extremely low winters like this do happen,” Weidensaul wrote in the post, noting that a winter of similarly low numbers, in 2010-11, was followed two years later by the largest snowy owl influx in generations.

Michigan birdwatchers will have to wait to see if a similar scenario plays out in ensuing years. In the meantime, spotting one of these Arctic beauties this winter could feel all the more special.

Why some Michigan trees keep their leaves through the winter

Is it safe to feed birds this winter? DNR says yes, with these precautions