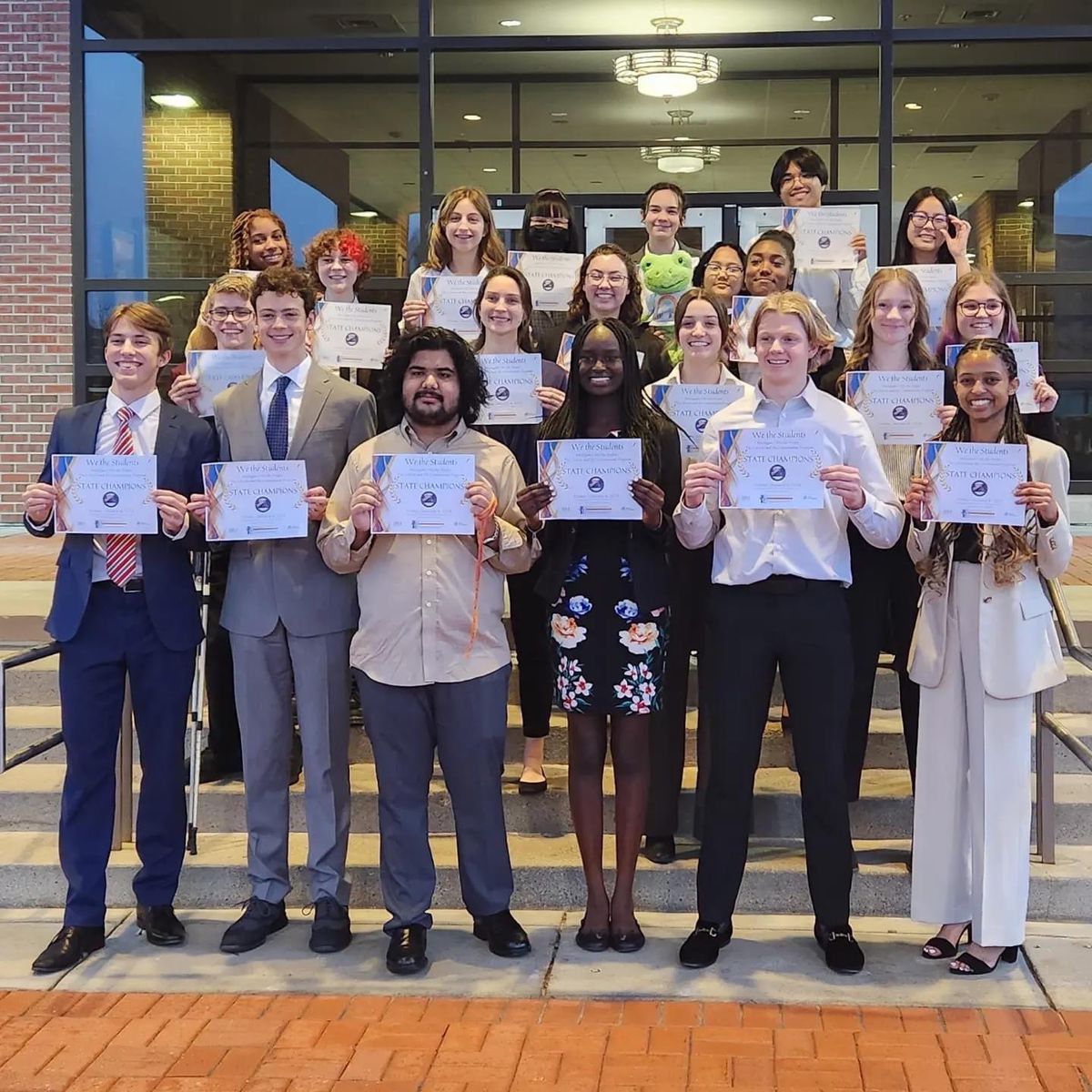 KENT COUNTY, MI – East Kentwood High School students are heading to Washington D.C. after taking first place at the “We the People: The Citizen and the Constitution” state finals to compete for a national title.

The event this month featured simulated congressional hearings. During the hearings, students testify before a panel of judges, who act as members of Congress, to demonstrate their knowledge of constitutional principles.

Kentwood’s team of 21 seniors won on Jan. 9 after competing against six other teams from high schools across the state, including East Grand Rapids and Hudsonville at the Michigan State University College of Law.

The hearings are typically judged by law school professors, lawyers and politicians, said Justin Robbins, the instructor and coach for Kentwood’s We The People team.

Developed by the Michigan Center for Civic Education, “We The People: The Citizen and The Constitution” program is centered around the teaching of the history and principles of U.S. constitutional democracy. Students learn a six-unit curriculum and then put their knowledge to the test in state and national simulated hearings once a year.

The group says its primary goal is “to promote civic competence, responsibility, appreciation, and enthusiasm for the Constitution and our societal issues among the nation’s upper elementary and secondary students.”

The seniors enrolled in Robbins’ sixth hour American Political Thought class, earn credit for the class, but being involved in We The People is more like an extracurricular activity, Robbins explained.

“Unlike other classes, where there’s a study guide attached and you get an individual grade, this is different. The motivation is, ‘We’re going to show this off publicly, and strangers are going to ask us things and score us,’ and these are the kind of kids that want to show well in that setting.”

Students log in hours of practice, often staying after school to work with coaches on their writing, presentation and research skills. The team has five full-time coaches who volunteer their time to help the team, including a retired teacher and a local defense attorney, Robbins said.

Kent County Prosecutor Chris Becker even volunteers his time to help judge the team’s practice runs ahead of the mock congressional hearing. Becker himself participated in the We The People program as a high school student when he attended East Kentwood, Robbins said.

In preparation for this year’s state finals competition, East Kentwood’s team spent over 160 hours just in December practicing their skills, Robbins said. The students even got together over winter break to spend hours studying and preparing together.

“I think the Kent District Library probably had a group in their study room every day that it was open over break,” Robbins said. “I was really proud of them for their resiliency, and I’m really happy that they got to see some payoff in that sense.”

In April, the team will represent the Michigan in the We The People National Finals championship at the National Conference Center in Leesburg, Virginia.

This is the first time since 2010 that East Kentwood has won first place in the state finals, Robbins said. The team has had the opportunity to go to nationals a few times as a “wild card team” in past years because they came in second to East Grand Rapids High School.

After years of coming in second place, Robbins said the team kicked into high gear this year to try and win the competition.

“I remember early in December, I kind of got after them and said they didn’t have enough practices lined up,” the coach said. “By Sunday night, they had planned everything through the New Year and all six units. It was kind of them saying, ‘no, we want to be good at this.’”

On the bus ride home from the state finals, the students spent the entire time blasting tunes on the radio and singing songs in celebration of their win, Robbins said.

“It was cool to see them finally have the payoff for all that work,” he said.

‘I couldn’t have dreamed of this:’ Holland teacher gets $25K check from district to buy first home