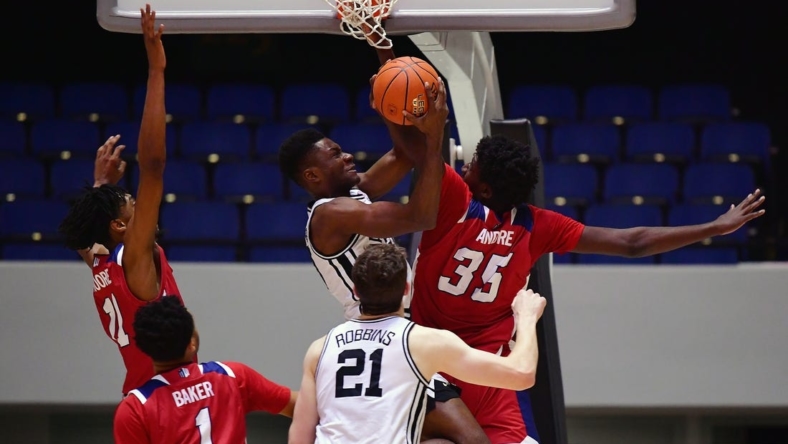 Vanderbilt’s Liam Robbins scored 20 points and teammate Tyrin Lawrence made two crucial baskets after Fresno State rallied for the lead, helping the Commodores earn a 67-59 victory on Thursday in the consolation game of the Wooden Legacy in Anaheim, Calif.

After a back-and-forth stretch, Lawrence scored on consecutive possessions as Vanderbilt built a 60-57 edge with 2:35 to go.

Robbins made two free throws with 2:02 left to extend the advantage, and the Commodores converted on three more free throws before Fresno State halted the run.

Robbins, who shot 7-for-11 from the field, also was credited with eight of his team’s nine blocked shots.

Fresno State (1-5) lost its fifth game in a row despite Jemarl Baker Jr.’s 22 points. Isaih Moore and Eduardo Andre added 10 points apiece for the Bulldogs, who shot just 4-for-23 on 3-point attempts. Baker was 8-for-20 from the field, though only 1-for-8 from long distance.

Fresno State had a 45-35 rebounding edge courtesy of 12 boards each from Moore and Andre.

Vanderbilt scored its last seven points on free throws, and the Commodores ended up 15-for-22 at the foul line. They shot 40.7 percent from the field and hit 8 of 23 3-point tries.

Vanderbilt went up 44-33 early in the second half and then went more than three minutes without scoring.

Fresno State used a 10-0 run to build a 49-46 lead. Vanderbilt was back in front after 3-point baskets from Stute and Lawrence.

Vanderbilt scored the last eight points — all in the last 70 seconds — of the first half to take a 31-26 lead to the break.

Fresno State shot 31.4 percent from the floor while making just 1 of 12 attempts from 3-point range in the first half. For the game, the Bulldogs hit 34.8 percent of their field-goal attempts.

A screen displays Federal Reserve Chair Jerome Powell speaking as a trader works on the floor of the New York Stock Exchange (NYSE) in...
Read more

Key points from Labour’s blueprint for a ‘New Britain’

Sweeping plans to reshape Britain’s economic and political landscape have been set out by Labour’s commission on the future of the UK.Here are some...
Read more
Load more
Facebook
Instagram
LinkedIn
Pinterest
Tumblr
Twitter