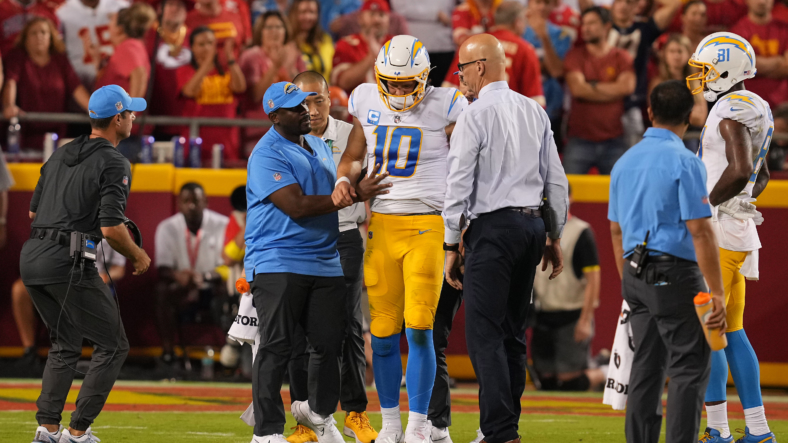 The NFL injury report is always filled with some of the game’s best stars, leaving fans and fantasy football managers scrambling to find out who will play. Heading into Week 3 of the 2022 NFL season, Dallas Cowboys star QB Dak Prescott is already inching toward a return from thumb surgery.

Bookmark this page for daily injury updates and news on NFL stars from across the league, whether or not they will play in Week 3 and how their injuries impact fantasy football.

Here is the latest injury news for some of the NFL’s biggest stars and the impact it will have on Week 3 in Sportsnaut’s NFL injury report.

Surprisingly, Alvin Kamara received just 12 touches in the Saints’ season opener. Totaling just 46 yards, it didn’t appear Kamara was his normal self. We later learned from coach Dennis Allen that Kamara was dealing with an injury to his ribs. He wasn’t able to suit up against the Tampa Bay Buccaneers. Mark Ingram led the team in rush attempts (10) and rushing yards (60) in Kamara’s absence.

It remains to be seen if Kamara will be able to go against the Carolina Panthers this Sunday after Kamara’s been listed as a limited participant all week, but he seems on the likelier side to suit up. Obviously, if Kamara plays, he’s a strong play in your fantasy lineups, whereas Ingram — not so much.

Back in Week 1, Davis caught four passes for 88 yards in a win over the Los Angeles Rams. Unfortunately, he showed up on the injury report leading up to Monday’s outing against the Tennessee Titans. Ultimately, Davis missed the game with an ankle issue.

With Davis sidelined, Stefon Diggs continued to dominate. Josh Allen’s favorite target caught 12-of-14 targets for 148 yards and three touchdowns. Regardless of Davis’ status on our NFL injury report heading into Week 3 against the Miami Dolphins, Diggs is an obvious fantasy and DFS play.

Labeled questionable, Davis himself said he’s 100% confident he would play against the Dolphins this week. That’s our assumption too.

After suffering a concussion on the final play of their Week 2 overtime loss, Hunter Renfrow has already been ruled out for Week 3. Stay tuned for further updates on Renfrow’s condition, as the Raiders receiver has not been able to take the practice field at all since the injury. With Renfrow out, expect Derek Carr to pepper Davante Adams and Darren Waller with a few more targets, but it’s possible secondary options such as Mack Hollins or Foster Moreau get a few more touches too.

Michael Gallup missed the first two contests of the season as he works his way back from a torn ACL.

The good news is that Gallup is expected to make his 2022 debut against the New York Giants Monday night. The bad news? He’ll be on a snap count, making him an unlikely target in fantasy. Instead, go with CeeDee Lamb as a starter while potentially looking to pick Noah Brown up off the waiver wire.

Josh Jacobs has soaked up the touches so far in the Las Vegas backfield, but after hitting the injury report with an illness on Thursday, the punishing back has received a questionable tag. He didn’t even travel with the team to Tennessee for their upcoming matchup with the Titans on Friday, but if his conditions improve on Saturday, it’s possible he travels separately. Keep your eyes peeled on this one.

Dobbins suffered a torn ACL in the first preseason game last summer and missed the entire 2021 campaign. It’s been a slow recovery for the Baltimore Ravens star, but he’s finally set to make his comeback. Still technically questionable, Dobbins returned to practice, getting three full sessions in this week. Yet, even if he does suit up, the Ravens won’t hand him a full workload just yet.

For now, Kenyan Drake remains the unofficial RB1 for the Ravens. The veteran has put up a mere 39 yards on 17 rush attempts through two games.

James Conner had to leave the game in the third quarter in last week’s thrilling overtime victory. Conner is dealing with an ankle injury that coach Kliff Kingsbury has described as day-to-day, but the running back managed to practice in a limited format each day this week. But that doesn’t mean he’ll play. Conner is officially a game-time decision against the Rams, which means even if he does suit up, it may not come with a full workload.

Eno Benjamin and Darrel Williams would be the two backs in line to receive more touches if Conner is a surprise scratch, but neither are likely strong fantasy plays against L.A.

Allen suffered a hamstring injury in the opener against the division-rival Las Vegas Raiders in Week 1. Given the short turnaround with Los Angeles having played last Thursday it made sense for the Chargers to sit him. He’s practiced all week in a limited format, putting him on track to return this week.

The five-time Pro Bowl performer has been among the most consistent receivers in the game over the years. With Allen sidelined in Week 2, Mike Williams responded by catching eight passes for 113 yards and a touchdown. We’ll have updates on Allen’s status in our NFL injury report throughout the week. For now, Williams is a must start going up against the Jacksonville Jaguars on Sunday, unless Justin Herbert can’t go.

Related: 10 fantasy football players who should rebound in Week 3

Here we go again. Tom Brady‘s newest go-to option could be looking at missing more time after a strong debut with the Buccaneers. After being unable to suit up Week 2 against New Orleans, Jones has once again been slapped with a questionable tag after Friday’s practice as he works his way back from a knee injury.

The seven-time Pro Bowl receiver was clocked as the seventh-faster ballcarrier in Week 1, so prior to the knee ailment he’s dealing with, Jones had been feeling pretty good. It remains to be see if he’ll be able to suit up in a big game against the Green Bay Packers in Week 3. For now, he’s a game-time decision.

Able to go Week 1 after suffering a torn ACL last season, Godwin went down with a strained hamstring in Tampa Bay’s season opener. The expectation is that he’s going to miss some time. NFL Media’s Tom Pelissero notes that he could be a few weeks. Godwin has not practiced at all this week and is ruled out for Sunday, as expected.

Expect Russell Gage and Julio Jones to get all the targets they can handle with both Mike Evans and Godwin out.

A surprise addition to the Week 3 NFL injury report, Schultz is dealing with a PCL sprain to his right knee. He’s firmly questionable to go Week 3 against the New York Giants. If Schultz in unable to go, expect a larger target share for the likes of Tony Pollard and Noah Brown. Schultz has not practiced all week and for now, seems doubtful for Monday.

The expectation is that Prescott will miss between four and six weeks after suffering a hand injury in Dallas’ season-opening loss to the Tampa Bay Buccaneers. Prescott underwent surgery on his thumb on Sept. 12 and has been making a quick recovery, already gripping a football ten days later on Sept. 22. He may even be able to return by Week 4 or 5.

This injury will obviously have wide-ranging ramifications in Dallas. Cooper Rush is the starter until Prescott is able to return. It’s in this that we should see some statistical struggles from wide receiver CeeDee Lamb after he caught just 2-of-11 targets for 29 yards in Week 1. Though, he did return to catch seven passes in Dallas’ Week 2 win over the Cincinnati Bengals. We’ll see how it plays out.

Jeudy suffered a rib injury in Week 2’s outing against the Houston Texans. The star receiver is considered questionable heading into Sunday night’s matchup with the San Francisco 49ers. Either way, Jeudy might be a fantasy sit given how well San Francisco has performed against the pass this season. Stay tuned for our NFL injury report for further updates on Jeudy’s status.

The expectation is that Justin Herbert will be able to go Week 3 against the Jaguars, but the star quarterback is still considered questionable after refraining from throwing in Friday’s practice. The third-year QB suffered fractured rib cartilage in Los Angeles’ Week 2 loss to the Kansas City Chiefs. But he’s always since been considered day-to-day.

If Herbert is somehow unable to go, veteran backup Chase Daniel would get the start, impacting the likes of Keenan Allen (if he plays) and Mike Williams in the process. We’ll have further updates on Herbert’s status when this NFL injury report is updated.

Lance suffered a broken ankle and other damage early in Week 2’s outing against the Seattle Seahawks. He underwent surgery and is out for the remainder of the season.

Jimmy Garoppolo will now be San Francisco’s starter from here on out. From a fantasy perspective, he’s limited. Though, Deebo Samuel should start cooking more with Garoppolo under center. The same thing can’t be said for Brandon Aiyuk, who enjoyed a great relationship with Lance.

Grandkids are supposed to steal your heart — not your house. A Brooklyn woman allegedly hijacked her grandmother’s longtime home by forging the elder’s...
Read more