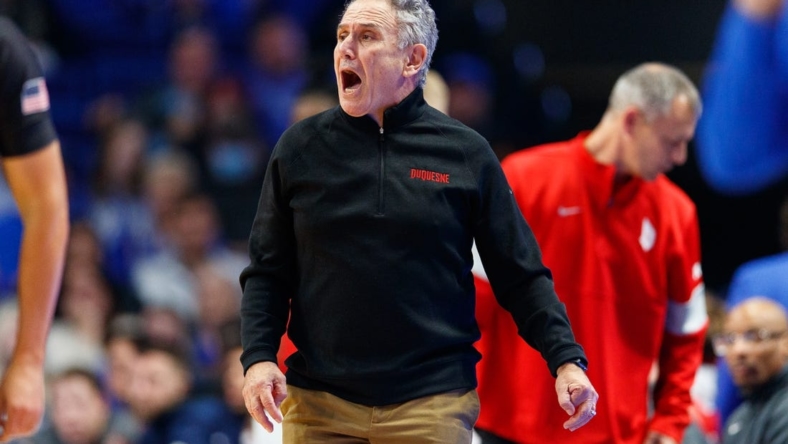 A case of the munchies interrupted the men’s basketball game between Loyola Chicago and Duquesne on Wednesday in Pittsburgh when an Uber Eats delivery man walked on the floor with the game ongoing.

Video from ESPN+ shows the delivery man, holding a bag of McDonald’s food and a drink, stepping onto the court a few feet away from Loyola’s Philip Alston, who then threw a pass that was intercepted for a turnover. Play subsequently was halted.

According to the Pittsburgh Post-Gazette, the referees waved the man away one time, but when he came back on the court and nearly interfered with play, they were forced to stop the action.

Duquesne coach Keith Dambrot told the Post-Gazette postgame, “I really didn’t see it, that’s how crazy it is. I just saw the video after the game. Our guys were dying laughing in (the locker room). Guy had a job to do. He did his job well.”

Dukes forward Austin Rotroff, who picked off the pass from Austin just before the stoppage, told the newspaper of the delivery man, “I didn’t see it at all. I know I was on the court because I had a bunch of people texting me about it because like I was in the clip, but I didn’t notice it in the game at all. I’ll have to rewatch the footage and see what he could have done better.”

According to the Post-Gazette, the delivery man completed his task, getting the food to a fan in the student section.

Duquesne wound up winning the game 72-58.