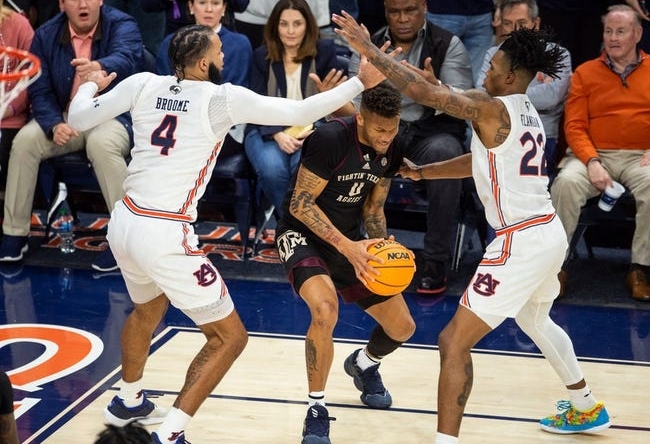 Behind the duo of Tyrece Radford and Wade Taylor IV, visiting Texas A&M upset No. 15 Auburn 79-63 on Wednesday night to end the nation’s longest home winning streak at 28 games.

Radford had 16 first-half points and finished with a team-high 30 on 8-of-17 shooting from the floor for Texas A&M (14-6, 6-1 Southeastern Conference). He added nine rebounds and was 11 of 12 from the free-throw line. Taylor IV had 15 points on 6-of-9 shooting and four assists.

Jahvon Quinerly had 14 points, four assists and four rebounds as the Crimson Tide rallied from an 11-point deficit to edge the Bulldogs in Tuscaloosa, Ala.

With the Crimson Tide ahead by three in the closing seconds, Alabama’s Noah Gurley blocked a 3-point attempt by Shakeel Moore to preserve the team’s ninth straight win. Alabama (18-2, 8-0 SEC) swept the two-game regular-season series with the Bulldogs (12-8, 1-7), who lost their fifth consecutive contest.

Brandon Miller had 13 points, six rebounds and three steals for the Crimson Tide, who won for the sixth time in the past seven matchups with Mississippi State. The Bulldogs got 15 points and seven rebounds from Tolu Smith plus 14 points from Dashawn Davis.

Emanuel Sharp scored 18 points and Jarace Walker added 17 to lead five players in double figures as the Cougars pulled away from the Knights in Orlando.

Marcus Sasser finished with 14 points and four assists, while Jamal Shead added 14 points, 10 assists and six rebounds for the Cougars (19-2, 7-1 American Athletic Conference). J’Wan Roberts chipped in 10 points and nine rebounds for Houston, which has won 10 of its past 11.

UCF (13-7, 4-4), which has lost three straight, was led by Ithiel Horton, who had 18 points and five rebounds. Taylor Hendricks added 17 points and seven rebounds.

Zakai Zeigler had 11 points, seven assists and four steals and the Volunteers held the Bulldogs to a season-low in points to cruise to a victory in Knoxville, Tenn.

Tobe Awaka finished with 10 points, while Santiago Vescovi added eight points, seven rebounds, four assists and a game-high five steals. Olivier Nkamhoua chipped in eight points and six rebounds for the Volunteers (17-3, 7-1 SEC), who have won eight of their past nine.

Georgia (13-7, 3-4), which dropped its third straight, was led by Terry Roberts, who had 11 points and five rebounds. Jabri Abdur-Rahim and Justin Hill added eight points apiece.

Souley Boum scored 16 of his 21 points in the second half for the Musketeers, which never trailed and held on for a victory over the Huskies in Storrs, Conn.

Xavier (17-4, 9-1 Big East) started hot and made enough plays down the stretch to sweep the season series thanks to Boum, who made four of his five 3-pointers after halftime. Colby Jones added 20 for Xavier, which led by as many as 17 but saw the advantage slip to one on four occasions in the second half.

Jordan Hawkins scored 26 of his 28 in the second half before fouling out, but it was not enough as UConn (16-6, 5-6) lost for the sixth time in eight games and saw their 17-game winning streak at Gampel Pavilion end.

Bryce Hopkins scored a game-high 16 points and added seven rebounds as the Friars beat the Bulldogs in Providence.

Devin Carter 10 points and 10 rebound for Providence (16-5, 8-2 Big East), which improved to 12-0 at home with its second straight win. Jared Bynum returned from an abdominal strain and scored four points in 11 minutes.