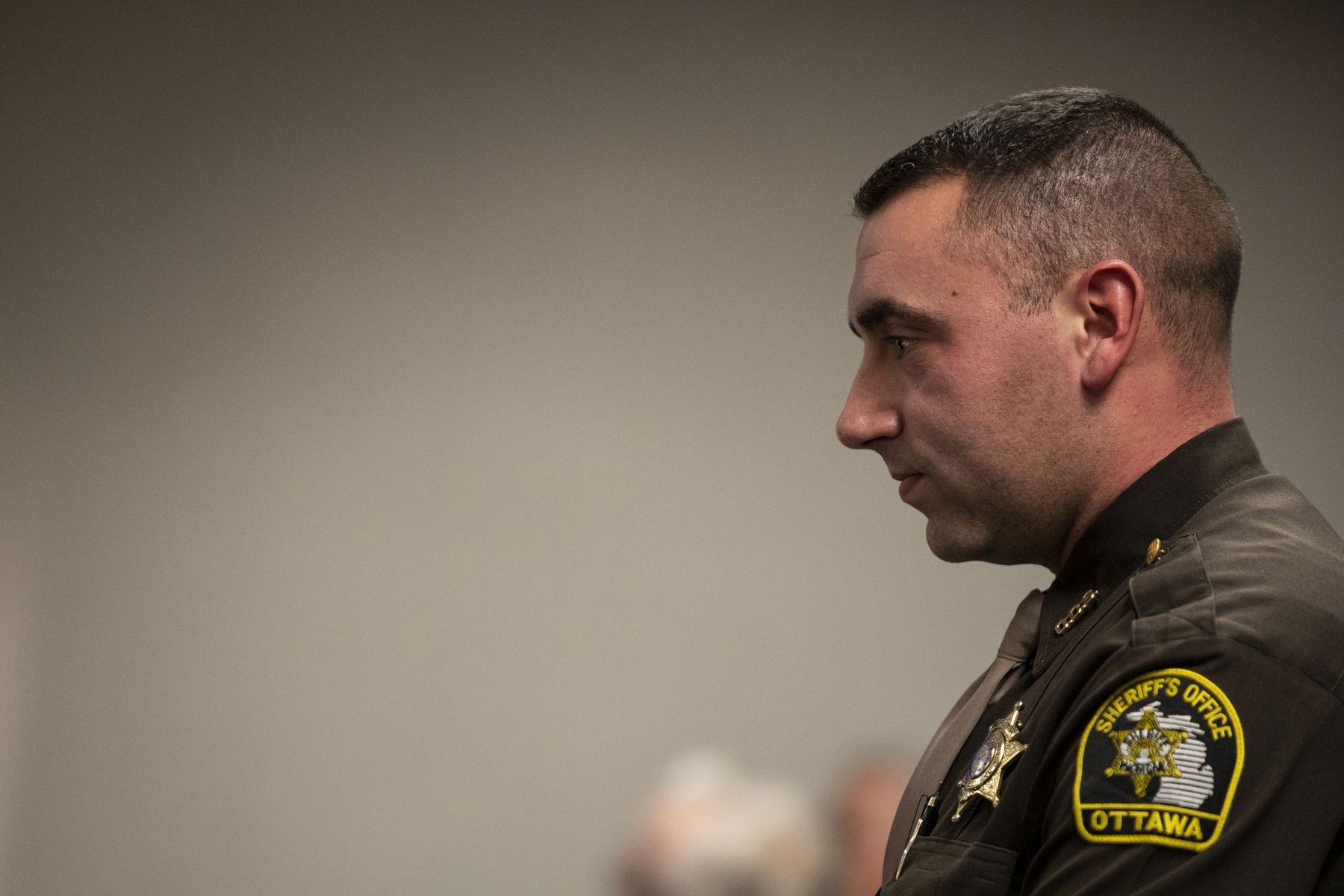 WEST OLIVE, MI — An Ottawa County Sheriff’s Office deputy said he’s looking forward to meeting with the family of a man whose life he saved just before Christmas.

Deputy Joseph Rohloff was given a lifesaving award by Sheriff Steve Kempker at the Ottawa County Board of Commissioners meeting Tuesday, Jan. 24. Rohloff applied tourniquets to an Allendale man critically injured in a barn explosion just before Christmas.

Carl Beintema, 37, was injured Friday, Dec. 23, when his barn exploded and he was trapped inside.

Due to severe blizzard conditions at the time of the explosion, emergency medical personnel were delayed getting to the barn on 52nd Avenue south of Jordan Street in Allendale.

Beintema was in critical condition, trapped inside the pole barn, which caught on fire during the explosion. Beintema’s wife, Ashleigh Beintema, had pulled her husband out of the barn while waiting for first responders.

Rohloff was in the area when the 911 call came in, and was the first to arrive on the scene of the explosion.

“There were several other explosions occurring and Deputy Rohloff found a sled on the property,” Kempker said while presenting the lifesaving award. “They were able to move Carl closer to the house.”

Beintema had severe lacerations and injuries to his legs. While waiting for paramedics to arrive, Rohloff knew he needed to act fast. Rohloff applied two tourniquets to Beintema’s legs. Later, a third tourniquet was applied to one of Beintema’s arms.

“We have tourniquets for the deputies, and it’s the best $35 investment this county made for the deputies,” Kempker said. “On this date, the tourniquet saved the life of Carl. The trauma surgeons at the hospital said Carl is alive today because of this piece of equipment. Carl’s wife, Ashleigh, reached out and called it a Christmas miracle, which it is.”

Beintema still has a long road to recovery, following multiple surgeries. His right leg had to be amputated at the knee, and a rod was placed in his left leg. The family posted on a fundraiser page for medical expenses that they expect Beintema to be at Mary Free Bed Rehabilitation Hospital for another month.

So far, the fundraiser has received more than $35,000. Ashleigh is a third-grade teacher in Allendale and Carl is a plumber. They have two daughters.

At the township board meeting, Beintema and his family joined the award presentation via a video call from the hospital to thank Rohloff for his actions. The family said they can’t wait to be able to thank the deputy in person.

“Thirty-two days ago, our lives changed forever and words cannot begin to describe our new lives,” Ashleigh Beintema said to Rohloff. “Joey, you allowed my husband to see his girls grow up and for us to grow old together. I could only do so much on my own and our family is forever grateful for this selfless act. You showed up because you knew we needed you.”

This is not the first commendation award Rohloff has received. He was one of five sheriff’s office employees honored for their actions trying to save three young boys trapped in their car seats in freezing water during a rollover crash in Holland Township last February.

Dozens again turn out for Ottawa County board meeting, offering both criticism and praise