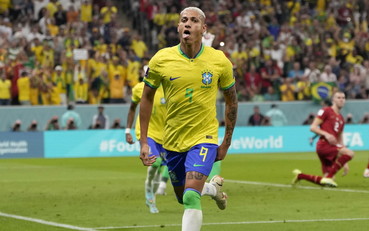 A test of strength and awareness. Brazil didn’t stick to their world debut, they dominated against Serbia who held up for an hour but then capitulated under Richarlison’s blows. The Tottenham striker gives himself a dream debut in the World Cup with a brace, within ten minutes, which extinguishes the ardor of the Serbs, organized and diligent for more than one half but in the long run unable to stem the class and quality of the Seleçao, at times simply overflowing. Neymar and Vinicius Junior do not score but have a hand in both goals and in all the most dangerous actions. Only the saves of the Milinkovic-Savic grenade, who showed off much more than his brother in Lazio, prevented a goal by the green-and-gold.

In the first half the 3-4-2-1 designed by Stojkovic succeeded in not giving space to the opponent. Veljkovic, Milenkovic and Pavlovic make a good impression against the trident of Brazil, also thanks to the retreat contribution of the wingers and midfielders. Milinkovic-Savic is good coming out shortly after the break to anticipate Vinicius. The Seleçao in one of the rare opportunities of the first fraction wastes with Raphinha immediately after the 30′, after a good triangulation with Paquetà. At the end of the fraction Milenkovic botched a duel with Vinicius but then made up for it by closing in extremis on the Real Madrid ace.

In the second half, after a muted first half, the Seleçao put their foot on the accelerator, increasing the pace and intensity of the game. And for Serbia they are pains. After just 40 seconds Milnkovic is providential in a new closure on the imprecise Raphinha, in the 10th minute Vinicius’ illuminating touch for Neymar who sends wide in a turn. The green-and-gold insist and shortly after Alex Sandro tries with a surgical conclusion from outside the area that is printed on the post. The goal is in the air and comes within two minutes. Neymar sows panic in the penalty area, the ball ends up in Vinicius who kicks first; Milinkovic-Savic rejects but lurking in the area is Richarlison who makes no mistake from two steps away. Stojkovic plays his cards Radonjic and above all Vlahovic, but now Tite’s eleven is master of the field, far and wide. The green-and-gold risk only on a couple of dead balls, but Richarlison still thinks about avoiding nasty surprises, who scores a Euro goal with a splendid bicycle kick on Vinicius’s cross. Up by two goals and with Serbia now disarmed, the Seleçao have fun and enjoy themselves. Casemiro hits the crossbar with a brushstroke from outside the area, in the final quarter of an hour also the youngsters Rodrygo, Martinelli and Antony (with Neymar out due to an ankle problem to be evaluated) show off. The Brazilian strikers are popping up from all sides, Milinkovic-Savic still puts a piece in and avoids the collapse of his team. He ends up in the cheers of the Losail Stadium crowd but above all with the feeling that – after all 32 teams in this World Cup have taken the field once – Brazil is the national team to beat.

Share
Facebook
Twitter
Pinterest
WhatsApp
Previous articleSpain, Muriqi scores and convinces: the story of the pirate of Majorca
Next article1 in 4 Americans Say They Won’t Be Having Thanksgiving Dinner Because They Can’t Afford It

“Ultimately we are in the results business and we have agreed with Wayne that the current trajectory for Wales is not where we want...
Read more
Hot News

Anthony Davis has been having monster games but questions are in the air if he can stay healthy in the latter parts of the...
Read more
Business

Augustinsson to leave Villa next summer

Aston Villa defender Ludwig Augustinsson is expected to leave the club at the end of the 2022/23...
Read more

“Ultimately we are in the results business and we have agreed with Wayne that the current trajectory for Wales is not where we want...
Read more
Hot News

Anthony Davis has been having monster games but questions are in the air if he can stay healthy in the latter parts of the...
Read more
Business

Augustinsson to leave Villa next summer

Aston Villa defender Ludwig Augustinsson is expected to leave the club at the end of the 2022/23...
Read more
Technology

TARENTUM, Pa. — Tarentum police accused a woman of punching an officer in the back of the head while he was trying to arrest...
Read more
World

Juventus, from Platini to Zidane: the victories of the French in the national team