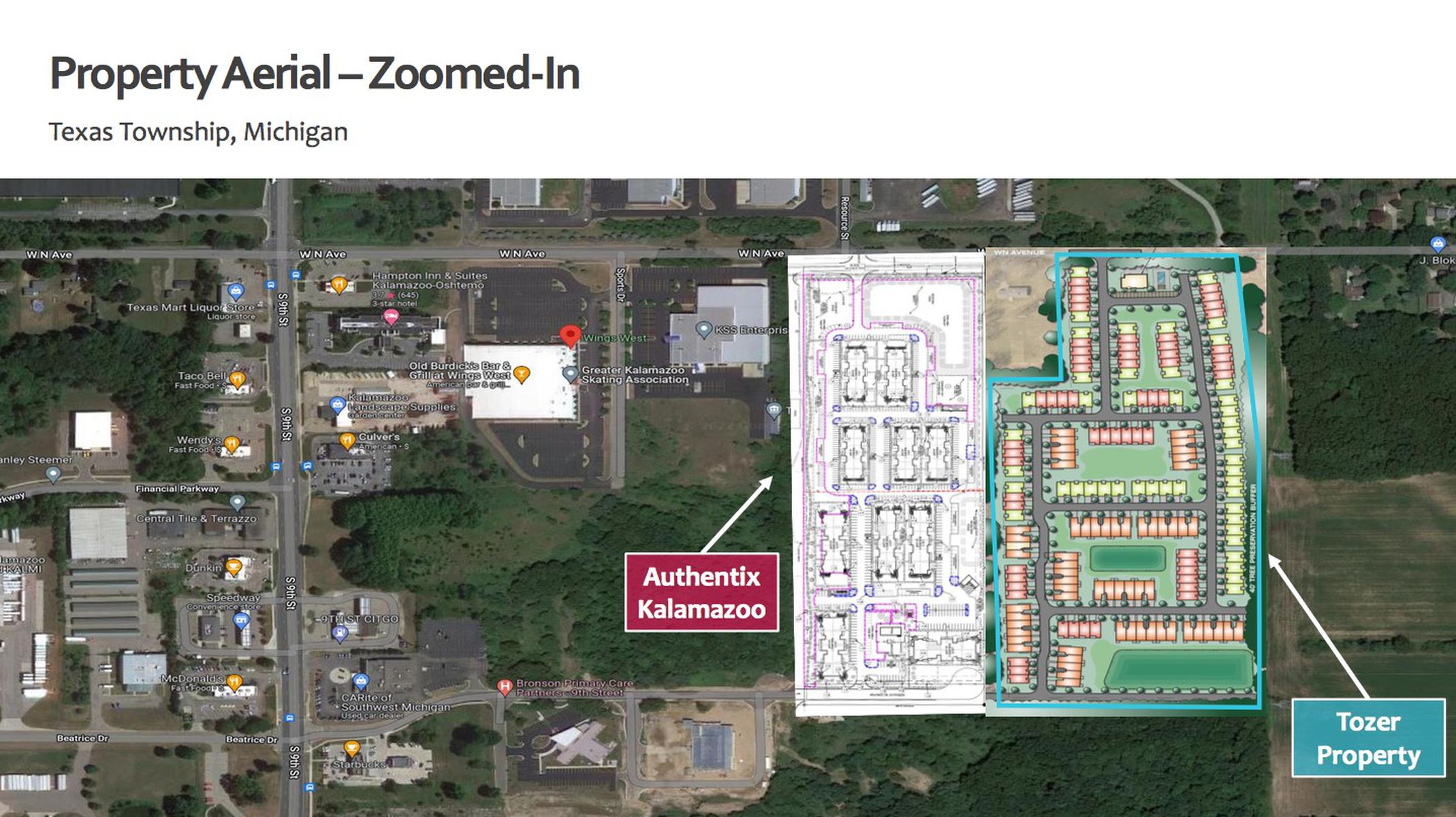 KALAMAZOO COUNTY, MI — A Detroit developer has designs on turning 25 acres of centuries-old farmland into a ranch-style, apartment community with 166 units in Texas Township.

The township’s planning commission voted 3-2, on Jan. 24, to approve a conditional rezoning of the land from R-2 residential, single-family, to R-5 residential, high-density, multi-family. The decision came after nearly two hours that involved a presentation from the developer, public comment and discussion among commissioners,

The zoning change is considered suitable, according to the township’s master plan as updated in 2020, Township Zoning Administrator John Lovely said prior to discussion on the matter.

The project will now go before the township board for approval, before a final site plan is developed.

The proposal, brought forth by Schafer Development, LLC, of Detroit, consists of 166 high-end, one-story, townhome-styled apartment homes that will be built on a 25.8-acre parcel on the Tozer farm, located south of West N Avenue and between 9th Street to the west and 11th Street to the east.

If approved by the township board of trustees, the Schafer development will be built adjacent to a higher density development, Authentix Kalamazoo, which was approved last fall and will bring 240 apartment units in two-story structures to a 20-acre parcel immediately west of where Schafer is proposing development.

Aaron Schafer, land development and acquisition manager with Schafer Development, told commissioners and nearly 30 people attending the meeting that his firm is aiming to attract active 55-and-over adults with high disposable incomes who are looking to downsize.

“Individuals need to have two-and-a-half to three times monthly income (compared to rent) to qualify,” Schafer said. “To quantify that in numbers, these are (being built for) individuals that make $70,000-$100,000 per year. We are making sure we get a high quality renter into this development. We are not just setting out to attract anyone and everyone. You have to fit a certain criteria to even be considered.”

Part of that criteria, he said, is that prospective renters with any criminal history will be automatically denied.

“The bulk of our demographic is that empty nester demographic,” Schafer said, adding that the older demographic will also add less stress to traffic patterns at peak times.

Traffic, along with changing the zoning to high density housing, were the top issues that brought over 30 neighboring residents to the planning commission meeting. Thirteen of those individuals voiced concerns with the project, with no one supporting the project as proposed.

“These look really good, they really do, but the problem that I have is if you rezone this to R-5, what happens down the road?” asked Darwin Warner, who built his house on South 11th Street in 1990. “If we start this now, where does it stop? My issue is not right now, what is going on with this, but in the future, it’s going to snowball and we’re all going pay for it. It’s going to disrupt our neighborhood.”

Being a conditional rezoning, Lovely said, the Schafer project is the only development that can go on the land as an R-5 and if it gets approved by the township board and doesn’t move forward within 18 months, it will go back to R-2.

“About density, with this being a conditional rezoning we are getting a step-down from Authentix,” said Township Treasurer Trish Roberts, who serves as liaison for the board of trustees on the commission.

Roberts went on to state that any municipality is required to have a variety of different zoning areas and Texas Township has always had a shortage of multi-family developments. She said when the master plan was redone in 2020, this area was considered the most appropriate due to proximity for services.

Most all residents expressed concerns that it was too much, with many asking for something softer, something smaller, or less dense.

“When you look at something being continuous with your surroundings, that development does not fit in,” said Robin Ross, a resident of West N. Avenue. “We are looking at single-family homes where people have been invested and lived there for 40, 50 and even 80 years.

“We are not opposed to development, but this development does not fit with the surrounding area.”

In response to resident concerns and questions from commissioners over whether a lower density might be economically feasible, Schafer said the landowner had a number in mind. After many conversations with the landowner, his firm determined that 166 was the target number to make the economics work.

“He’s held this property for quite some time and has been waiting for the right individual to come with the right proposal for development,” Schafer said. “And I don’t think it’s aggressive at all when you look at the development next door which is 240 units.”

An R-5 development allows for up to 10 units per acre, but Schafer pointed out that they are only asking for 6.4 units per acre. Authentix Kalamazoo will be 240 units on a roughly 20-acre parcel, which equates to 12.25 units per acre once that is built out, he said.

“Schafer Properties — my father, my twin brother and I, we are very selective on the properties we chase,” he said. “We saw the vision (of the township) for a higher density, more creative development … that was one of the things that attracted us to this site.

“My father went to Western Michigan so he is a longtime Broncos fan, and for a long time we have been really looking hard for pieces of land in the Kalamazoo market. This is one of the first properties we are proposing, a premiere, one story ranch apartment homes community.”

If approved by the township board, roughly two-thirds of the units proposed will feature two-car garages, along with driveway parking, while the remainder will have one-car garages. Each home will feature large walk-in closets, walk-in pantries and be built on slabs with no basements included.

A common area will consist of 34% open space and feature a clubhouse with other amenities on the grounds such as a pickleball court.

Theo & Stacy’s in downtown Kalamazoo to give way to Berries Famous Pancake House and More!