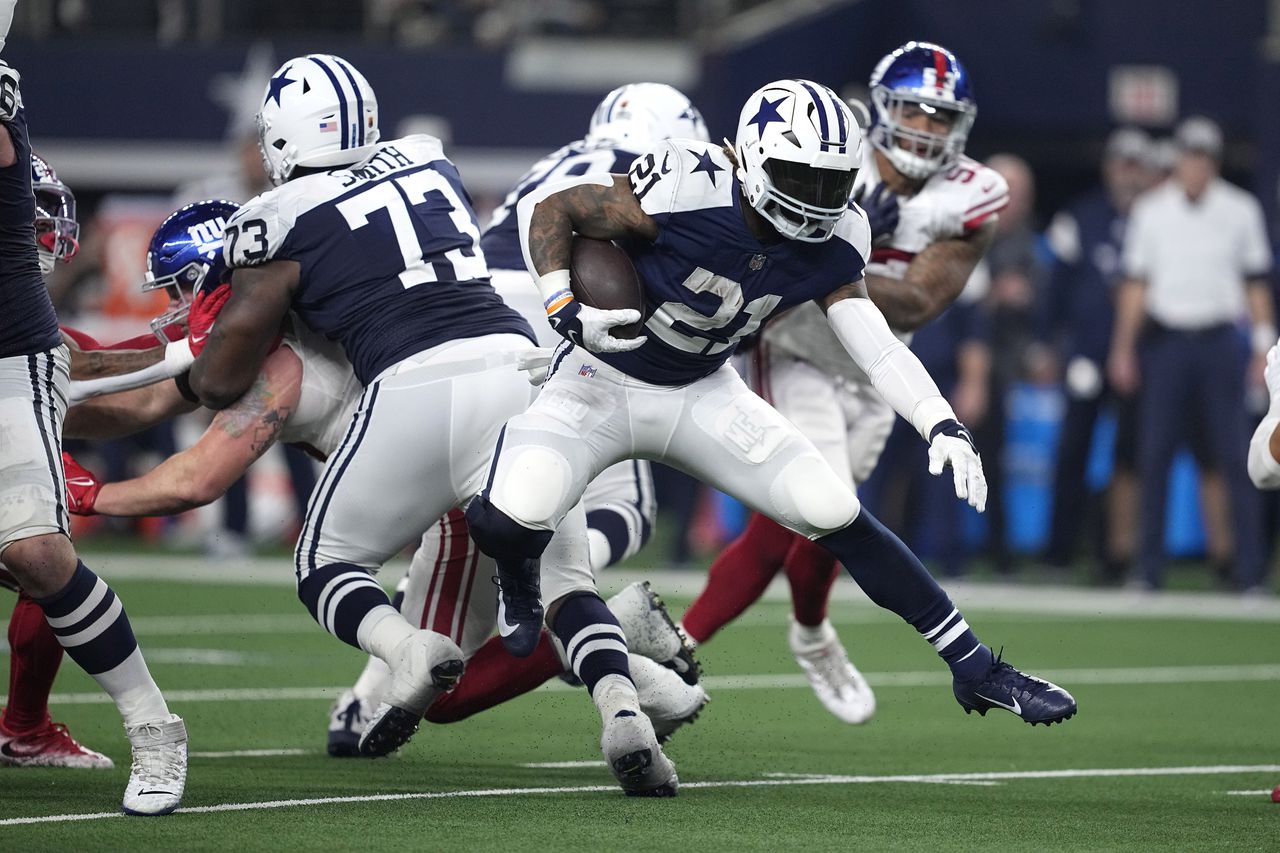 Rookie Peyton Hendershot ran for a 2-yard TD before directing all three of his fellow tight ends into a giant Salvation Army red kettle for a Whack-A-Mole celebration.

The victory ended a three-game losing streak on the holiday for the Cowboys (8-3), who moved a game ahead of the Giants in the NFC East while sweeping the season series.

Prescott’s TD tosses to Schultz came about five minutes apart in the third quarter, turning a 13-7 deficit into a 21-13 lead. The first was a 15-yarder on third-and-goal.

The Dallas quarterback has 10 consecutive victories over the Giants since losing to them twice when the Cowboys went 13-3 his rookie year in 2016.

Saquon Barkley was held to 39 yards rushing with a 1-yard TD behind a makeshift offensive line missing three starters because of injury in the third loss in the past four games for the Giants (7-4).

Dallas, the NFL leader in sacks coming in, dropped Daniel Jones three times while limiting him to 14 yards rushing after he ran for first downs seven times in the first meeting, a 23-16 Dallas win.

Jones’ TD pass to Richie James in the final seconds was too late for the Giants to take advantage of a 2-0 takeaway edge in the second Thanksgiving meeting out of 122 overall in the storied rivalry.

CeeDee Lamb had six catches for 106 yards and set up three Dallas touchdowns, starting with a 25-yard catch before Elliott’s 6-yard run.

Lamb’s one-handed grab for 15 yards came before Schultz’s second TD. A 23-yarder put Dallas at the 2, and Lamb thought he made another one-handed catch in the back of the end zone.

Mike McCarthy challenged the ruling that the toe-tapping catch was out of bounds. It was upheld on review, despite the Cowboys being so confident they sent the PAT unit out after seeing the replay.

The Dallas offense came back out with all four tight ends, and Hendershot took a handoff on a sweep left for the easy 2-yard score.

The rookie waved Schultz, fellow rookie Jake Ferguson and Sean McKeon into the red kettle, holding the ball with both hands while they popped up. Ferguson got tapped on the helmet.

Elliott had a season-high 92 yards rushing, and the Cowboys overcame two interceptions from Prescott, who threw for 261 yards.

Graham Gano tied the New York record for longest field goal with a 57-yarder in the first quarter. The kick came on fourth-and-32 after the Giants had a touchdown wiped out by a penalty for an ineligible receiver downfield and Jones was flagged for intentional grounding.

Illness sidelined three Cowboys who would have been active in DT Johnathan Hankins, DE Tarell Basham and CB Kelvin Joseph. … Giants CB Cor’Dale Flott left in the third quarter to be evaluated for a concussion.

Giants: Washington visits Dec. 4 in the first of three consecutive NFC East games for the Giants. The third of those is another meeting with the Commanders.

Schuyler Dixon of The Associated Press wrote this story.

Be thankful for the journey in sports, not just the winning | Opinion

- Continue reading below - Despite the exciting World Cup in Qatar, the rumors of transfer market in Serie A. The seventh position in...
Read more
United Kingdom

Chelsea would be a...
Read more

- Continue reading below - Despite the exciting World Cup in Qatar, the rumors of transfer market in Serie A. The seventh position in...
Read more
United Kingdom

Chelsea would be a...
Read more
Business

A ROYAL Family fan told how he tackled a heckler during the Queen’s funeral procession because he feared he was about to attack King Charles. Craig...
Read more
Load more
Facebook
Instagram
LinkedIn
Pinterest
Tumblr
Twitter