No. 23 Providence runs away from Butler for win 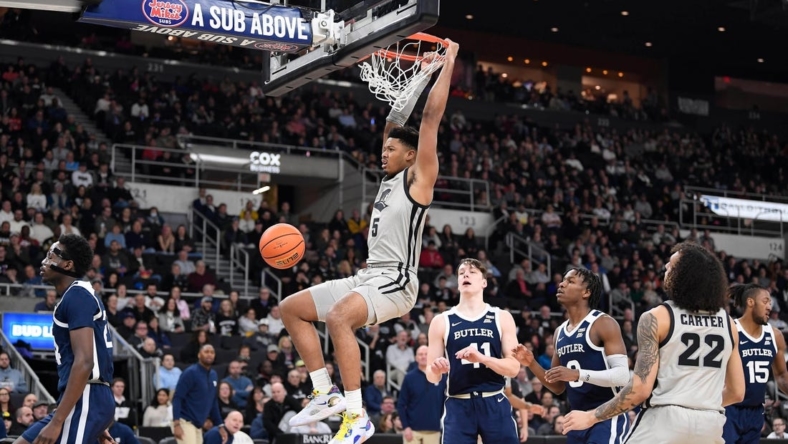 Bryce Hopkins led four double-figure scorers with 16 points and added seven rebounds as No. 23 Providence came from behind and cruised past visiting Big East rival Butler 79-58 on Wednesday night.

Devin Carter posted a 10-point, 10-rebound double-double and had four assists and two steals for the Friars (16-5, 8-2), who improved to 12-0 at home with their second straight win.

Both teams got significant pieces back from injury, but the presence of Friar guard Jared Bynum (abdominal) changed the game for good. After he entered with 11:19 left in the first half, Providence started a 27-10 run to open a 36-26 lead at intermission.

Playing for the first time since a Jan. 4 injury, Bynum scored four points in 11 minutes for the game.

After the late first-half surge, the Friars scored the first six second-half points and did not allow a field goal until Taylor’s and-one layup at 16:39. Carter sent Hopkins ahead for a two-hand flush to make it a 48-33 score.

The Providence lead grew as Jayden Pierre (four assists) set up three straight Friar buckets — a Floyd triple and back-to-back Moore shots — before his own jumper followed a steal and Hopkins dish.

A Hopkins layup and Moore jumper bookended a 6-0 Friar run, but Hunter Jr. scored a 3-pointer to finish Butler’s 8-0 response with 6:15 left.

Noah Locke’s triple reestablished a 20-point lead that remained from the 3:44 mark through the finish.

Butler entered the first stoppage up 8-5 following a Simas Lukosius triple, then Taylor’s layup off an Ali Ali steal and a turnaround jumper capped an 11-4 run to bring the Bulldog lead to 16-9.

With Bynum running the point, the Friars immediately rattled off a 13-0 run in just 2:22.

Bynum’s drive for a layup made it 16-15, but the hosts continued to run out of a Butler timeout. Floyd’s wing 3-pointer and a Hopkins jumper finished the spurt, giving the Friars a 22-16 lead.

Butler got within 26-24 with 5:03 left in the half before Pierre’s corner trey highlighted a 7-0 Providence run.

Carter drained a 3-pointer with 10 seconds left in the opening half to establish a double-digit lead for Providence.