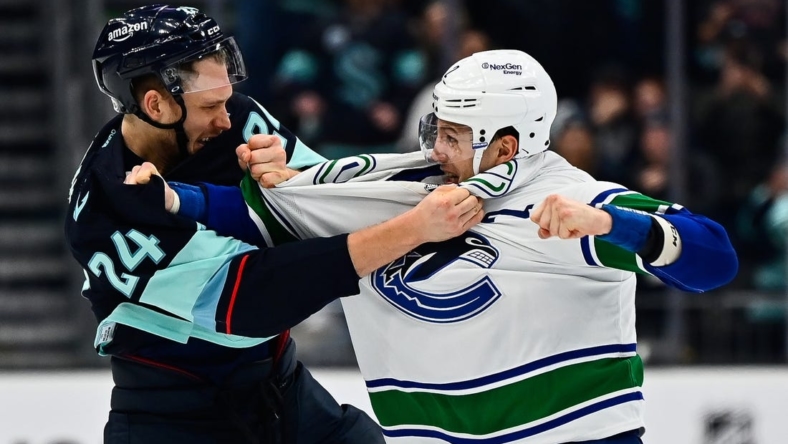 Oliver Bjorkstrand scored twice and the Seattle Kraken surpassed their victory and point totals from their expansion season, defeating the visiting Vancouver Canucks 6-1 on Wednesday night.

The Kraken improved to 28-14-5 with 61 points after going 27-49-6 with 60 points last season. They also defeated Vancouver for the first time, after going 0-5-1 in six previous meetings since Seattle entered the league.

Jared McCann added a goal and two assists, with Alex Wennberg, Eeli Tolvanen and Ryan Donato also scoring for Seattle, which improved to 10-2-1 in January and tied Vegas for most points in the Pacific Division. Jordan Eberle, Yanni Gourde, Vince Dunn and Adam Larsson each had two assists and goaltender Martin Jones made 19 saves.

Conor Garland scored and Spencer Martin stopped 29 of 35 shots for the Canucks, who dropped to 1-1-0 under new coach Rick Tocchet.

They were unable to muster the same effort in Seattle, as the Kraken took a 2-0 lead in the opening 10 minutes with an 11-2 edge in shots.

Bjorkstrand opened the scoring at 7:57 after Martin kicked out Larsson’s original shot from the blue line. Bjorkstrand corralled the rebound between the hashmarks of the faceoff circle and put a wrist shot into the upper left corner of the net while falling backward.

Wennberg doubled the lead on the power play at 9:46 of the first.

McCann made it 3-0 with a man advantage at 5:55 of the second, Tolvanen scored at 7:50 and Bjorkstrand tallied again at 16:15 on a wrister from the right faceoff dot.

The Canucks got on the board with a fluke goal at 19:52 of the second. Jones stopped Dakota Joshua’s original shot, but the rebound went to Curtis Lazar in the low slot. Lazar’s shot went off the stick of Garland, who was on all fours just outside the top of the crease after getting knocked to the ice, and deflected over the goalie’s left pad and into the net.

Donato capped the scoring at 2:36 of the third.