“I committed a levity” – Il Tempo 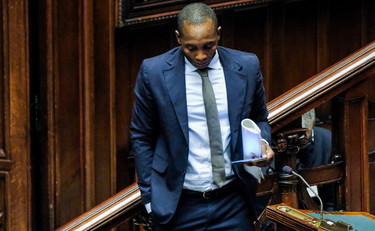 Aboubakar Soumahoro held out for days. But in the end he gave in. The leaders of the Green-Left Alliance, Angelo Bonelli and Nicola Fratoianni, forced him to suspend himself: “We are confident that he will clarify,” they said. The official version is that the decision was made by him alone, in total autonomy. In reality, the leaders of the “bipartite” who brought him to Parliament were very disappointed by his behaviour. When the scandal broke that engulfed his mother-in-law’s cooperatives involved in welcoming migrants, in which his wife also worked for years, the champion of laborers did not provide explanations to the leaders who provided him on a silver platter seat in Montecitorio. He limited himself to a video on Facebook in which, in addition to sobs and tears, he provided few explanations (today he swears that he would never shoot that video again). Then, when he could no longer ignore the strong political pressures, he accepted the confrontation. The first meeting with Bonelli and Fratoianni, which lasted two hours, was held last Wednesday. But it was not resolved. So much so that yesterday they met again. After another five hours, the decision of the “self-suspension” was taken by the group of the House. It was also an opportunity to agree on the line to be followed in the studio in Piazza Pulita, where Soumahoro presented himself last night. The parliamentarian gave his version of the investigation concerning his mother-in-law Marie Therese Mukamitsindo, administrator of the Karibu coop (in which his wife Liliane Murekatete was president), accused of embezzlement. The situation exploded when the complaints of the employees of the coops began to “rain” (in addition to Karibu there is also the Aid Consortium) who complain about the non-payment of salaries. In recent days, attention has shifted to the League of Laborers, the union founded by Soumahoro. Some of his former associates accuse him of having withheld the money intended for refugees for himself. His defense arrives in front of La7. Pressed by Corrado Formigli’s questions, he begins by recalling that “the management of the reception center” which belongs to his mother-in-law “is about twenty years ago”, while he only met his partner in 2018. Then he adds: «It appeared to me that the cooperative was virtuous». At this point, Soumahoro makes an important admission: “My wife informed me that there were unpaid wages. When I asked her why, she replied that there were delays in payments by the public administration. But it’s true, I made a mistake, I should have made fewer trips and stayed close to those workers”. Soumahoro admits to having been to one of his mother-in-law’s centres, but what he saw then “did not correspond to the complaints that are emerging today”, i.e. borderline situations, with migrants forced to live without food, light and water. «Whoever made a mistake will have to answer – he adds – If I had known of an investigation I would not have applied. My mistake was that I didn’t elaborate. I don’t forgive me.” Finally, the private side: «I asked my wife the reason for this whole situation. And I say: in the face of things like this, there is no family bond that holds”.

AN ETIQUETTE guru has revealed how to indulge in a crumbly mince pie while still appearing elegant and sophisticated. TikTok tutor Lucy Challenger, 39,...
Read more
Business