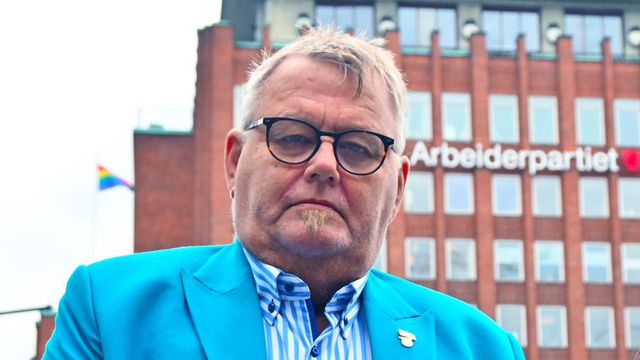 Two weeks ago, former union leader of the Norwegian Railways Association (NJF), Ove Dalsheim, threatened to resign from the Labor Party if they continue to pursue what he believes to be right-wing politics on the railways.

Former union secretary of the NJF, Arne Drabløs, registers that many people with connections to the railway have resigned from the Labor Party.

– I estimate that between 200 and 400 railway workers have opted out, he says.

To be or not to be

For four generations his family has voted for the Labor Party. Drabløs is clear that he is a social democrat.

Drabløs, who is now retired, usually travels around the country and gives lectures on the history of the Labor Party and on trade union political cooperation. Now he is flying mad.

He no longer wears the red rose, but is a proud trade unionist. The former leader of Drammen Ap is today furious with the party.

– I think Ap must clean up its own house properly and get rid of the market liberals who characterize politics. Several hundred railway workers have already left the party and some have chosen to join Trond Giske’s local team in Trondheim. That must then make the party leadership open their eyes and react, he says.

The Norwegian Railways Association has a tradition of participating very actively in the election campaign. And they always have a big conference in the election year where central Ap people come and have a dialogue with members and union representatives.

– I understand the frustration of the LO confederation now. They cannot participate so much in next year’s election campaign for this government. We usually tend to be election campaign workers. If we do that this year, the union itself risks losing frustrated members. People despise politicians. This should worry Jonas Gahr Støre, says Drabløs.

Confederation leaders in a pinch

Drabløs can understand that confederation leaders in LO feel in a pinch after they have come out and promised that they and a new red-green government were guarantors that the tendering and privatization will stop.

– The reversal, which the LO confederations guaranteed, has not happened. Now people out there are flying mad that the government is not delivering. It puts extra pressure on the shop stewards in the railway unions in LO, he says.

When Drabløs started on the railways on 1 August 1978, the railway party team in Oslo, Drammen, Hamar and Trondheim and in many other municipalities was large – and there was close professional political cooperation between LO and Ap. He believes that is no longer the case.

– The trade union political cooperation has completely crumbled and there are almost no Labor members left on the railway.

Drabløs is known for his humorous perspective on life, but today he has dressed in a turquoise jacket and does not bring much praise to the party based at Youngstorget. For him, the eagle (ed. note: as the party has been called) has abandoned his values ​​and ideology. And the railway policy is pure right-wing politics.

– Must take back control

Drabløs does not think the political response to the reactions from the railway community has been good.

– I think today’s transport minister must take back political control. Establishing a new company in the extension of Flytoget is at best “Galimatias”, he says.

Drabløs believes that by creating new companies, they will also not be able to establish full-time positions that both Labor and LO are fighting for.

– This means that the remainder of Vy must start with call-up and part-time positions created by a minister from the Labor Party, says Drabløs, shaking his head.

He is not surprised that many social democrats report switching to Nidaros Ap team. The party team led by Trond Giske now has around 1,000 members.

– People will try to get the Labor Party back to the social democratic party that they can trust, he says.

There are several central railway workers and Ap people who have now left the party in protest. Jan Remi Hæger, Chief Protection Officer at Spordrift AS, is one of them.

– Ap has always been my party, but now I don’t recognize the values ​​I stand for. I don’t think the railway policy is anything to brag about, even though they stopped the tender round for us in Sportdrift. If they had shown us that they stand for social democratic values ​​and give us security, then it is easy for me to fall back as a party member. I don’t join other parties, he says.

Häger has never considered joining Nidaro’s party team. He says that the debate is taking place at the grassroots and many want to return to a state NSB. He’s not sure if that’s for the best.

He is also not sure whether he wants Bane Nor and Spordrift to merge.

– The most important thing for me is that the railway must be in state hands, he says.

– People who work in Spordrift do not identify themselves with all the names of the various companies. Railway workers are tired of change and say they work on the railway. They want peace now, says Jan Remi Hæger.

Other shop stewards who confirm that they have been deregistered from Ap are head of the conductors association in Drammen, Nils Slette, former head of Ski Ap, Harald Teigen and chief safety representative Lise-Lotte Solum in VY.

Øyvind Gurholdt, who previously led NJF in Bane Nor and has been a member of the federation’s board, has joined Nidaros Ap.

Ap: – Sad that railway workers are leaving the party

State Secretary Johan Vasara (Ap) in the Ministry of Transport is sincerely sorry that many railway workers in the trade union movement have resigned from the party.﻿

– I don’t have any concrete figures on how many people have opted out, but it’s always sad when people leave Ap. We are a broad people’s party with room for everyone, says Vasara.

Vasara has noticed that several voices from the railway sector have gone out in the media with their criticism. And he admits that he finds it extra sad that it comes from railway workers who have held positions in the party or who are shop stewards.

– For us in the government, railway workers are an important listening post and I believe we have achieved a good dialogue with the representatives of the railways about future railway policy. Last week at the latest, the Ministry of Transport met the leaders of NJF and Lokmannsforbundet and others, he says.

The Secretary of State can understand that rail people are impatient and think things are going too slowly. But when it comes to what they have done, Vasara is proud of the course change he believes they have made.

He believes that many people misunderstand what is meant by the words “splitting” and “competition”.

Vasara says that the government has stopped all tendering on the railway, as they announced in the Hurdal platform, and he is proud of that.

– The Conservative government had proposed that 1,300 employees in operation and maintenance should go out to tender, and that new foreign train companies could also enter. We already stopped that in November and now we are moving on with the two Norwegian state-owned companies that people know, namely Vy and Flytoget, he says.

He also wants to reassure anyone who believes that conditions will be worse if they change Flytoget in the future.

The Oslo tunnel is a bottleneck

– It is the case that we have a large bottleneck in the Oslo tunnel and the situation gives strong limitations in terms of getting more travelers from road to rail, which is also a goal of the Hurdal platform. A major expansion of the Oslo tunnel will be a long-term and expensive one, and could also go beyond other projects, so now we are trying to rethink how Flytoget operates, he explains further.

– The government has tasked the directorate with drawing up traffic agreements that can strengthen the railway as a form of transport, that is to say get more people to choose trains also on sections where the capacity is currently not optimally utilised, such as the commute through the Oslo tunnel.

The Minister for Transport has also announced a review of today’s two state-owned train companies, the result of which could be a merger of these.

– For us in the government, it is just as important that we ensure good working conditions and full permanent positions as in the trade union movement, says the former mayor of Kautokeino.

The State Secretary reminds that Vy and Flytoget have run on the same tracks for over 20 years and have a long tradition of working together for the benefit of the customers.

Vasara points out that they in the Hurdal platform announced a review of the company structure and organization in the sector, among other things with the aim of fewer companies.

– We do not engage in tendering and splitting up, but aim to create good railway policy, underlines State Secretary Johan Vasara.

Now he is looking forward to several dialogue meetings with the union representatives in the railway.

The Celtics female staffer who had an affair with head coach Ime Udoka helped make his travel arrangements — and her job sometimes included...
Read more

The Celtics female staffer who had an affair with head coach Ime Udoka helped make his travel arrangements — and her job sometimes included...
Read more
Health