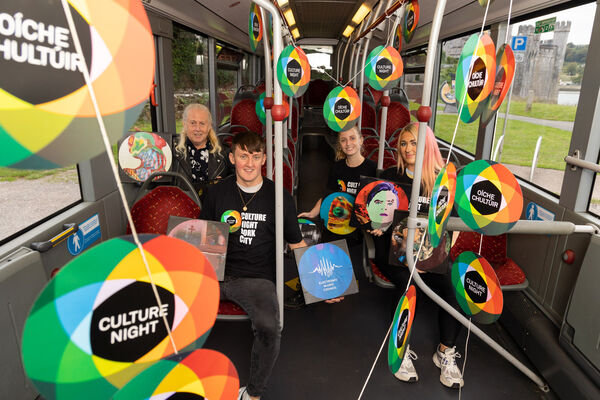 Check out the cream of the Cork musical crop at City Hall for this free late night event organised in conjunction with promoters extraordinaire The Good Room. Performers include FishGoDeep, Stevie G, Brian Deady, Minnie Marley and Kestine. Also featuring will be an intriguing double act — adopted Corkonian and celebrated writer Doireann Ní Ghriofa teams up with singer-songwriter John Spillane.

Sea shanties have enjoyed a surge of interest among land-lubbers thanks to the tastemakers on TikTok adopting this ancient musical form and popularising it among a new wave of younger fans. Let your imagination take a trip across the waves as the Molgoggers group from Cobh perform their wonderful harmonies in the former Presentation Convent.

All aboard for the return of the culture buses. Three different routes across the city take in stops including UCC, Old Cork Waterworks, Shandon, Blackpool and Centre Park Road. Poetry in Motion will feature readings on board from writers including Gerry Murphy, Billy O’Callaghan and Alannah Hopkin. Also, as part of Read Mór, passengers on Irish Rail intercity and Bus Éireann Expressway services will be given a free book. Don’t worry if you miss your first choice here — there’ll be another one along in a minute.

Circus Factory are always a big hit with the crowd and this year is sure to be no different as they bring their spectacular talents to the perfect setting of the city’s Coal Quay – what could be more appropriate than the backdrop offered by one of the city’s ancient arteries? Local and international street theatre artists will give the audience the modern circus experience.

Explore the area surrounding the gallery — one which is rich in history — with historian Dr Tom Spalding, who will give an illuminating insight into the events of the revolutionary period and the world of those who lived through it. For younger patrons, there’s a tour with a difference, as some cultural aficionados of the puppet kind give an interactive guide to the much-loved venue.

The Kabin Studio in Knocknaheeny/GMCBeats have been representing Northside musical talent with pride in recent years, bringing their gift for communication through hip-hop beats to the Late Late Toy Show and beyond. They will host a rap, beats and songwriting workshop at their HQ in Knocknaheeny and craic aplenty is promised at their trad music come-all-ye. All bases covered, in other words.

UCC has a discrete cultural hinterland all of its own and at its centre, both literally and figuratively. The Boole Library will welcome visitors with a slate of interesting events. There’s plenty to choose from — a chance to try your hand at Zine Making; a special one-off performance by alternative folk rock band Boa Morte, including a sneak preview of their upcoming album; and Show & Tell — Life on Land: Trees & Birds from the 17th to 21st Centuries, an accompaniment to the online exhibition, featuring maps, posters, prints and books of trees and birds.

Just down the road from UCC, the courtyard of the Cork Printmakers’ HQ plays host to artist Marie Brett’s new short film Dragon’s Tail, described as an epic folk myth, exploring electromagnetic energy and cultural lore. The ten-minute long work will be screened on a loop, and accompanied by live musicians in specially created ‘straw-girl’ costumes. A prospect worth investigating.

One of Cork’s favourite storytellers, Conal Creedon joins forces with Cobh’s rising star of crime fiction Michelle Dunne to talk murder, mayhem and whatever you’re having yourself right in the heart of the city. Alibis not included.

Not quite the captive audience of times past but fans of music from bygone eras are in for a treat with this performance inspired by the orchestras of the 1920s and 1930s from the Cork Light Orchestra. The acoustics are sure to match the atmospheric surroundings, so get there early and soak both up.

As Halloween approaches, this is the perfect opportunity to search for spectres with real-life Ghostbusters. Paranormal investigators from the Cork Supernatural Society will share their expertise and their experiences of real paranormal activity in Ireland’s most famous and haunted locations before proceeding to a ghost hunt of the Youghal Clock Gate Tower, one of the most atmospheric locations in the county.

Explore your inner campanologist with the Ballymodan Bellringers as they ring out the commencement of culture night in the west Cork town of Bandon. Just keep the ‘pull the other one’ lines to yourself.

Filology Workshop/Concert: What Am I Hearing When I Listen to Jazz? (Salvi’s Cafe, 7 Pearse St, Kinsale, 6pm-8pm)

Just in time for the upcoming Jazz Weekend, an opportunity to educate yourself on the finer points of the musical form without splashing out on a black polo neck. Described as a light introduction to the grammar of jazz, John Philip Murray will give a brief history of the music’s origins, while also using a popular tune or two as examples. With Brian Priestley on piano, Michael Riordan on double bass and Chris Engel on saxophone. Followed by an hour-long concert. Nice.

What’s better than one puppet show? The answer is two puppet shows, of course. Watergrasshill first plays host to Basher Bacon, with Dominic Moore, one of Ireland’s most experienced puppeteers, pulling the strings. Then, the OG of puppet shows, Mr Punch, is back stirring up trouble in a new show created by Alex Hindmarsh. Will he get what’s coming to him? Find out in this fun family show.

Watching a movie outdoors is a magical experience when the Irish weather co-operates. When it’s one of the best musicals of recent times in the stunning setting of a castle, all the better. Join Hugh Jackman and the gang in for all the hits from the Greatest Showman’s gazillion-selling soundtrack.

The days of NASCAR drivers being quiet and limited about the sport have appeared to come to an end. This is certainly an amazing...
Read more
Business

Arizona is only a game out of first place in the NFC West before the calendar even turns to October, but the Cardinals certainly...
Read more
Load more
Facebook
Instagram
LinkedIn
Pinterest
Tumblr
Twitter