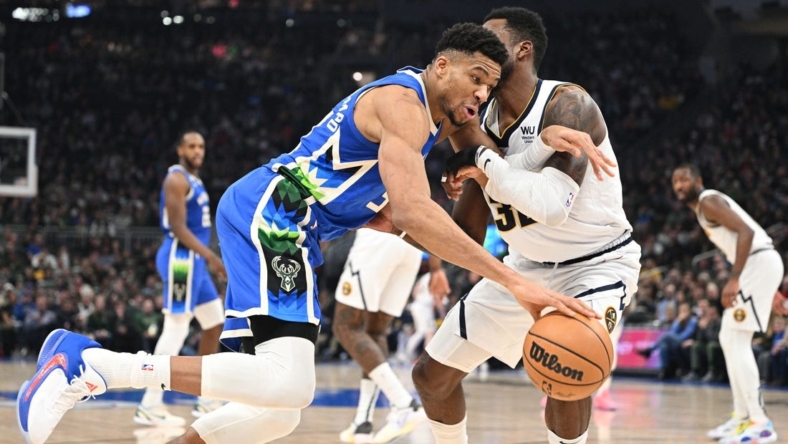 Giannis Antetokounmpo had 33 points and 14 rebounds, Jrue Holiday had 20 points and the host Milwaukee Bucks beat the short-handed Denver Nuggets 107-99 on Wednesday night.

Pat Connaughton had 19 points and 12 rebounds and Khris Middleton added 10 points for the Bucks.

Antetokounmpo, who turned it over nine times, was 15 for 22 from the line and attempted six more free throws than the Nuggets.

Aaron Gordon had 26 points and 14 rebounds, Bones Hyland scored 15 points off the bench, Bruce Brown added 12 points and Jeff Green finished with 11 for Denver, which lost for just the second time in the last 12 games.

Milwaukee was without Bobby Portis, who suffered a sprained MCL in his right knee in a win over Detroit on Monday night. He is expected to miss several weeks.

Denver hung tough and trailed by five at halftime. The visitors cut it to 63-62 after Vlatko Cancar hit a 3-pointer with 6:53 left in the third, the Bucks went up by five but Hyland’s finger roll got the Nuggets within 71-70.

Milwaukee scored 10 straight points to go up by 11 but Green hit a half-court shot at the buzzer to pull Denver within 81-73 heading into the fourth.

The Bucks scored the first six points of the final period to lead by 14, the Nuggets answered with five straight but a 3-pointer by Allen gave Milwaukee a 90-78 lead.

A three-point play by Antetokounmpo gave the Bucks a 10-point lead, and after the teams traded 3-pointers, Antetokounmpo made four free throws in 39 seconds to make it 106-92 with 2:14 remaining and Milwaukee closed it out.