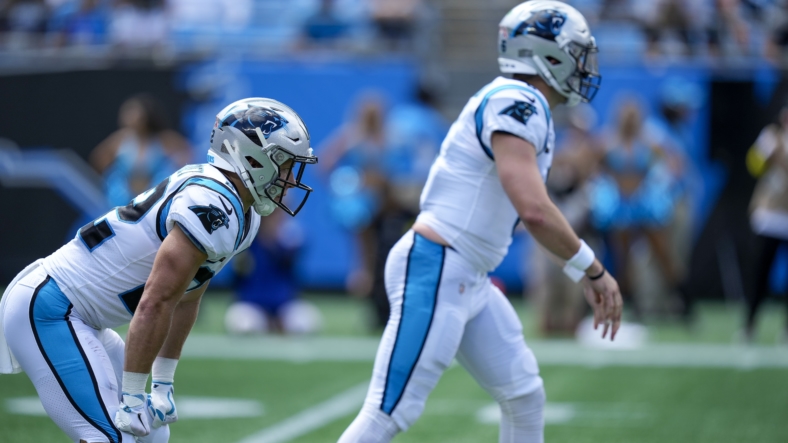 Football teams, whether it’s coaches, assistants, or players, spend hours watching film. Unlike in previous generations, they have access to such tape anywhere they have an internet connection. This extra access allows more opportunities to recognize consistencies, or tells, which help opponents predict what the play call may be.

If so, it’s a big deal, as opponents will use every bit of information available to them to gain any possible advantage on the gridiron. It’s why the New England Patriots being found guilty in the Spygate filming of an opponent’s practice was such a big story back in 2007 when they were penalized by being stripped of their first-round selection in the following NFL draft.

While that’s not the case in Carolina, Orlovsky says specifically he’s noticed a tell thanks to how Christian McCaffrey lines up next to Baker Mayfield in the offensive backfield. Here’s the clip where he reveals his discovery to the public during an NFL Live appearance on ESPN

The former NFL QB is saying when CMC lines up one yard behind his quarterback, the play is either a run or an RPO. And when McCaffrey lines up next to Mayfield, the ensuing play is a pass. He claims this has a 100% success rate, as far as whether the tell proves true or not.

Without going back to check both games of the film, if accurate, this is not a good look for the third-year head coach currently on the hot seat after two seasons in which he missed the playoffs. Then again, coach Rhule insists Orlovsky better get back in the film room because what the football analyst sees and says isn’t true.

Of course, coach Rhule didn’t appreciate this sentiment from the ESPN analyst, but he was willing to comment on it only to refute Orlovsky’s suggestion when asked about it.

In addition to denying the claim, Rhule goes on to say his proof that the Panthers don’t have a tell is due to the fact that the Carolina offense was still able to rumble for 6.3 yards per carry in their latest Week 2 matchup against the New York Giants (who won the game).

Is that really his only proof? The Panthers still lost, and well, the Giants would have had just one previous game of tape to pull this information from. It’s not exactly a large sample size. Maybe it’s something they recognized during the game and accounted for, helping them emerge with another win.

If Orlovsky’s claim proves correct, whether this falls more on Matt Rhule or new offensive coordinator Ben McAdoo or on Mayfield remains to be seen. All we know is that the Panthers are currently 0-2 and have failed to score more than 24 points this season. While the pre-snap lineup may not be as predictable as Orlovsky states, it wouldn’t hurt for the Panthers to head back to the drawing board because their approach hasn’t taken anyone by storm.

Needless to say, the New Orleans Saints now have a new factor to pay attention to when they turn on the film one last time before Sunday. Or, at the very least, it gives thousands of fans tuning in something specific to watch for during Sunday’s scrum.

But we wouldn’t expect to see the same situations play out in Week 3, now that Rhule is very aware of the specific statement Orlovky proposed to the public. There’s no way he allows it to continue for another week as they still search for their first win on the season, right? There’s no way.

The Tampa Bay Rays ruled second baseman Brandon Lowe out for the season on Saturday, and also announced that right-hander Shane Baz will undergo...
Read more