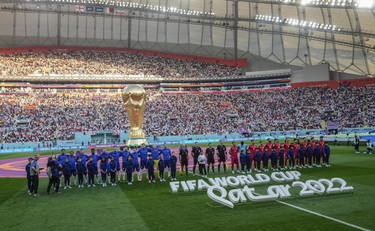 Images of Iran players failing to sing the national anthem in a circle in their World Cup opener against England in Qatar have gone around the world. The photos of the team in conversation with the president of the Islamic Republic Ebrahim Raisi were circulating on the cell phones of the activists and the people in the square and aroused an almost univocal reaction among those who have been protesting for more than two months for a more democratic Iran: “Traitors”. “Were the people in the streets demonstrating and the players ‘negotiating’ with the regime? Some even showing themselves happy in the photos. This is why in stadiums and squares, Iranians cheered against Iran”, he explains to LaPresse Asghar Adibi, player of the Iranian national football team in the 70s and today an activist in France against the regime. There are those who are now asking for a new and clearer stance by the national team as early as tomorrow against Wales, or even more so in the symbolic match against the USA on November 29th.

According to those who know their compatriots well, there would be very little to mend now: “I honestly don’t care about football, if Iran wins or loses the match, this team will still have disappointed the Iranians. Football is very popular in Iran , when I was playing, 100,000 people came to the stadium to watch the matches, Iranians love football, but now the situation is completely different, because the regime is gradually trying to take over all the sports organizations, including the Iranian Football Federation which is with the pasdarans. Some national team players are very close to the mullah’s government,” he adds. The reference to that conversation that took place with Raisi before leaving for Doha is clear: “This team – explains Adibi – I’m ashamed to say, they’re only playing for the money. In Qatar, a player answered a question about the protests saying I don’t deal with political issues, I’m just a sportsman. That’s why we now say everywhere that this is not the national team of Iran but the national team of the mullah’s regime”. And this is why last Monday on the streets of Tehran the Iranians cheered at every goal scored by England: “I think it was the first time in the world that fans of a country cheered against their national team. When England scored, the Iranians were happy and cheered against the dictatorship,” he said again. LaPresse Asghar Adibi, according to which Fifa should have excluded Iran from the World Cup immediately: “When Russia attacked Ukraine, Fifa immediately decided to exclude the Russian national team from the World Cup qualifiers. Why didn’t they take the same decision with Iran? This is the demonstration that something has to change in Fifa, they have been working as ‘Mafia’ for too long”, attacks the former footballer.

“I am ashamed of this FIFA president, he is a great charlatan”, continues the activist. Remaining in football, there are those who are paying for their anti-IRI stance. Iranian security forces arrested popular footballer Voria Ghafouri on charges of “insulting and undermining the Iranian national football team and propaganda against the Islamic Republic”. Ghafouri has been vocal in supporting protesters following Amini’s death. “I played against Pele and Eusebio”, concludes Asghar Adibi, I wish the real Iranian national team one day to be able to play against champions of that caliber”.