Cork — the city where I sported, played and enjoyed so many gigs 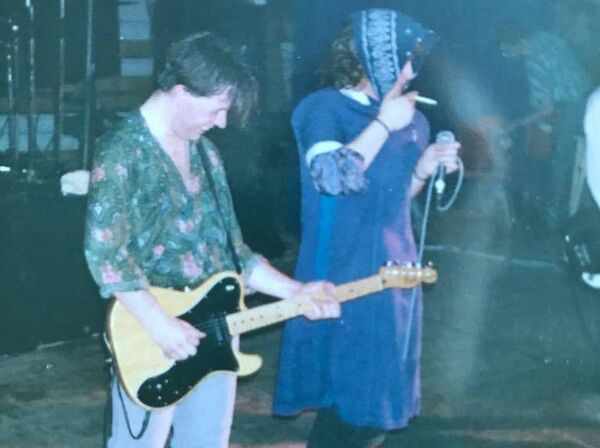 It was only when I went to tweet about it that the weirdness of my relationship with Cork revealed itself.

“Cork,” I said, “Where I have supported Cypress Mine, worn a dress onstage in City Hall, been implicated in destruction of Cork Opera House and led a group of people behind a giant chicken!”

And that, trust me, isn’t the half of it.

Cork, when Something Happens was in its infancy, had all the allure of New York, Berlin or London. Sir Henry’s was mentioned in the same breath as CBGBs, The Marquee or The Whiskey a Go Go. It was mythical, the gigs that had happened there talked about in hushed tones.

New York was easier to get to. Cork was in a different time zone, had different tea, Guinness, food and language. We had music in common, but Cork music was common was Microdisney and Five Go Down to the Sea. They were evolved. We were amoeba.

You had to plan the trip. A stop off in Morrissey’s of Abbeyleix was essential. On the way down it was for tea and a sambo, on the way back pints. You also had to drive through every small town on the way. Depending on traffic that might take six hours.

But it was worth it to get to Sir Henry’s. We approached it, that first time in about 1986, like pilgrims. We touched its walls, gazed at the live photos. It was all we could do not to bless ourselves.

We soon met house sound man, the legendary Dennis O’Herlihy. He soon sussed that we were as nervous as kittens in a bag and put us at ease. He had heard of us he said, was looking forward to seeing us. He smoothed our path. Eight hours later we had “played Sir Henry’s”.

This was the beginning of a long and loving relationship with Cork. We befriended Cypress Mine and would swap support slots with them between our gigs in Dublin and theirs in Cork. We played multi band bills with Dave Fanning ushering us on stage. We were suddenly more popular in Cork than Dublin.

We also befriended Brendan and Kevin, later of the band LMNO Pelican. Part of the ritual of our Cork visits was to touch base with them for a quiet pint. During these meetings our progress in music would be discussed, new songs critiqued, performances analysed. It was gentle but unflinching.

As we made progress in music the venue sizes increased and eventually we sold out the Opera House. We were nervous. This was big. The gig was rapturous but seats were damaged in the excitement. The next day this was front-page news. We felt like The Beatles.

When we graduated to very large venues Cork reserved the biggest for us. I could not quite believe it when we sold out City Hall. The gig was brilliant but leaving the stage I took a wrong turn. I found myself in a cleaning closet that had a cleaning woman’s house dress on a hook. It was encore time and well, who could resist?

Our after show parties are still protected by the Official Secrets Act, thankfully. But we did invent a drink. It was called the Russian Suction, and with a flame and a little diligence, you could attach it to any part of your body. This left something very akin to a love bite on you.

This was most entertaining at breakfast where you could look around the dining room and see the guilty parties everywhere. Some with perfect circles on each cheek, their forehead, necks and indeed, other, less visible places. Marked as if by the hand of God, their sins for all to see.

We also played a few Lark by the Lee events, one most notably with Rory Gallagher. To stand side stage while he played was one of the greatest ‘Take me now, Lord’ moments of my life.

All trips to Cork ended in the Long Valley for lunch the next day. These were the sandwiches of the gods. The toilet was semi-alfresco, a radical design I was sure would take off internationally. It was always a sad goodbye, but next stop was Abbeyleix.

There was always the next time, until one day there wasn’t. There was talk of venues giving way to ‘club nights’ with less live bands. Then someone invented motorways. Sure if you weren’t stopping in Abbeyleix, what was the point of going?

By any measure — including the one created by defensive line coach Andre Patterson — the Giants’ pass rush wasn’t good enough against the...
Read more