Bride left at altar during wedding carries on with party 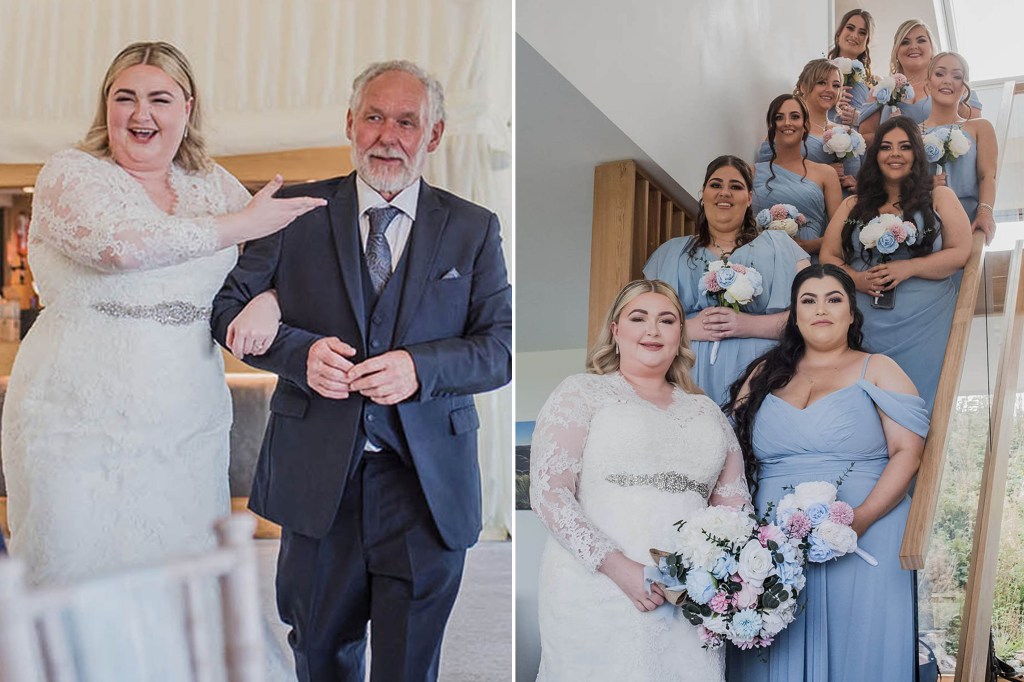 A Welsch bride was left at the altar on the day of her wedding after her would-be groom didn’t show up.

However, Kayley Stead didn’t want to let her pricey bash go to waste, so she went along with her plans and enjoyed her wedding day — without her now-ex-fiancé who mysteriously vanished — surrounded by her beloved friends and family.

Stead, 27, realized on Sept. 15, the morning of her nuptials, that she had a feeling she wasn’t going to walk down the aisle to marry her partner, who she had been with for four years, when she was ghosted.

“I saw the groom at around 4 p.m. the day before the wedding and I haven’t heard from him since,” Stead, who is an insurance clerk, told Southwest News Service recently.

“We’ve tried to reach out to him, but I’ve had no response from him, no reason why. I’ve had no explanation — not that I want one now, because it’s too far along the line.”

While the groom’s disappearance remains a mystery, Stead was determined to have a special day. So, she carried on with her event at the Oxwich Bay Hotel in Swansea, Wales and even did her wedding entrance, speeches, first dances and posed for her professional photos.

She began her evening by waltzing into her reception alongside her baby blue-dressed bridesmaids as they sang along to the Lizzo hit “Good as Hell.”

Stead danced her first dance with her groomsmen, her brothers and her dad Brian, 71. Also at the reception, she gladly cut and took a bite of her wedding cake and boldly smashed the top tier of the towering sugary gateau.

The ditched bride also walked through her sparklers path with friends and partied the day away with her guests before spending the night in the bridal suite with her maid of honor.

She also went into more detail about the incident, explaining what went down in the hours prior to the wedding.

The Welsh native began dating her ex-fiancé in December 2018 and they got engaged in August 2020.

She noted how she stayed in an Airbnb the night before the party with her gals, while the groom and his groomsmen resided in a caravan near the venue.

Stead and the groom had decided not to speak to each other the evening before the marriage, so she “didn’t know what was happening on his end and didn’t have a clue.”

The next morning, Stead and her bridesmaids woke up at the crack of dawn to get their hair and makeup done. It wasn’t until one of the groomsmen phoned up her best friend to let them know that the groom had vanished.

“They wanted to make sure he was definitely gone before panicking me,” she said. His mom had also called up Stead in hysterics, sobbing that the groom had gone for a drive in the early morning, and he was now gone.

Stead pointed out that her ex often times went for walks or drives by himself to clear his head when he was anxious, and therefore she didn’t feel nervous at first.

She advised her friends and family to keep on getting ready and she held out hope that the groom would return.

“I honestly believed, hand on heart, that he was going to be there,” Stead recalled.

However, by 11 a.m., the groom’s father revealed that he would not be showing up after all.

“At that point, I was gone. I was sobbing,” Stead said, adding that she had to break the news to the rest of the bridal party, her hairstylists, parents and videographer.

Her videographer then came up with an idea as a joke — to just have fun, keep calm and carry on with the wedding.

The filmmaker suggested: “You’ve spent all this money, you’re not getting it back, all your guests are there, why don’t you just go?”

Her friends egged her on, encouraging her to keep on going. “That’s when I was like, I’m going to do it. I’d spent all this money, I’d been looking forward to the food, a dance with my dad, spending time with my family, so why not?” Stead recollected.

The groomsmen and her bridal party then headed down to the venue to explain to the guests what had just transpired. All of the groomsmen stayed, as well as her friends, family and loved ones.

Her partygoers were sad about the devastation, but nevertheless, they supported Stead and stayed for the reception.

Despite wanting to party on, Stead couldn’t bear to look at the ceremony room, feeling that it was too painful for her.

After 10 minutes to pull herself together, she was ready to dance the night away, though. While her guests were scared to talk about the elephant in the room, they just started cheering and hugging Stead in a show of support.

Her photographer went on with photos, taking snapshots of the bride and the bridal party in the venue’s garden and around the party. “You can probably see a few tear streaks down my face, but I love the photos,” she stated.

She added: “I wanted to make sure everyone knew that it wasn’t about the sad and we were going to power through this. It was a very awkward situation for [my friends] to be in, but they all stayed.”

“I didn’t want to remember the day as complete sadness,” Stead continued. “There were so many special moments… so there was still happiness in the day. I’d spent all this money, I’d been looking forward to the food, a dance with my dad, spending time with my family, so why not?”

“I was in complete bliss — unknown bliss,” she said. “I had no clue, no signal. He showed me no reason as to why he would leave me on that day.”

She also feels very grateful for her best friends, who haven’t left her side since the ordeal. They even set up a GoFundMe page for Stead to help pay for some of the event.

She then canceled her honeymoon trip to Turkey and packed up her ex-partner’s belongings from her home and left them with his family. She still has not heard from him since his unexpected departure.

Stead’s bestie and MOH Jordie Cullen, 27, was the one who initially created the fundraising page and also spoke to Southwest News Service about the traumatizing experience.

“Kayley has a heart of gold and would do anything for anyone,” Cullen said. “She did not deserve to be left on the morning of her wedding day with no explanation and zero contact from the groom.”

As for Stead, she’s taking it one day at a time,

“I don’t believe in fighting fire with fire,” she said. “I’d rather just deal with the situation as best as I can and hold my head high.”

The retirement of Roger...
Read more