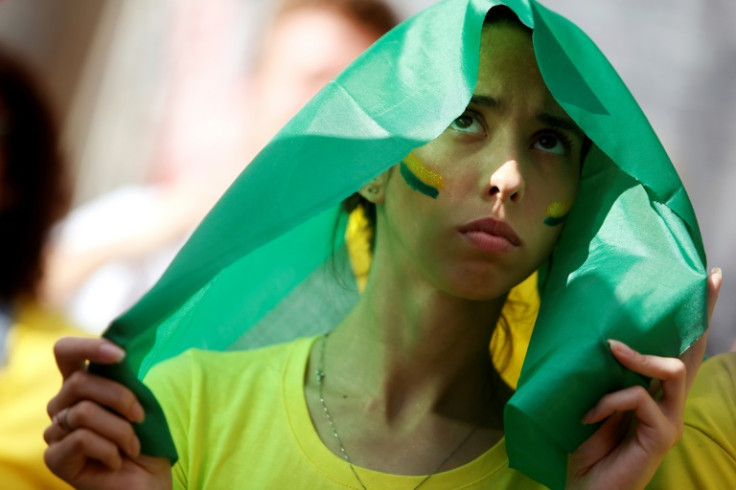 In yellow-and-green bikinis, Neymar jerseys and sparkling tops straight out of carnival, Brazilians dropped everything Thursday to watch the national team make their highly anticipated World Cup debut, exploding in celebration at their opening win.

Packed in front of a giant screen on Rio de Janeiro’s famed Copacabana beach, in the middle of what would normally be a work day, fans of all ages cheered Brazil’s 2-0 football victory over Serbia — and allowed themselves to dream a record-extending sixth World Cup title could be on the horizon.

Standing on the seaside avenue in his Brazil jersey, construction worker Benildo Ferreira erupted in joy at the second of the two goals, both fired home by Tottenham Hotspur striker Richarlison.

“I was worried” during the goalless first half, Ferreira, 51, told AFP, as fireworks exploded overhead.

It was an anguished wait for many in football-mad Brazil, whose fevered passion at World Cup time often draws comparisons to a nation going to war.

Milton de Souza nervously stirred his caipirinha in a seaside bar as he waited for the opening goal.

“We just have to be patient,” said the 58-year-old retiree, who was wearing green and yellow — as was virtually the entire country, it seemed.

He was cautious on the question of whether the “Selecao” could end their 20-year title drought.

Others were already daring to dream.

“The Cup is ours this year, without a doubt,” said 23-year-old Marcos Vinicius, who accurately predicted a Richarlison brace before the match.

City centers in Rio, Sao Paulo and other hubs of Latin America’s biggest economy meanwhile turned to ghost towns as Brazil ground to a halt to watch the match.

Street-food vendor Kaua Suarez, 19, and three clients were crowded around a cell phone he had propped up on his hot dog stand, watching the match in Rio’s near-deserted city center.

“I had to work, so I found a way to watch anyway. I’m going to watch every match, no matter what time,” he said.

“Football is every favela kid’s dream in Brazil. We’re crazy about it. Brazilians are born loving football.”

Even president-elect Luiz Inacio Lula da Silva took time out from political horse-trading ahead of his January 1 inauguration to watch.

He tweeted a picture of himself and his wife in national team jerseys, a TV in the background, with the message: “Congratulations Brazil. On our way to title number six!”

The small army of vendors selling jerseys, flags, scarves, hats and endless other World Cup gear were meanwhile happy Lula’s win in Brazil’s divisive October elections had finally brought an end to a taboo on wearing yellow and green, the colors which defeated far-right President Jair Bolsonaro and his supporters had embraced as their own.

“People were resistant. They really waited until the last minute to buy (yellow and green gear), because of the political situation,” said vendor Giselle de Freitas, 41, who was selling a plethora of earrings, tiaras and other accessories on Copacabana.

For most, World Cup fever won out in the end.

Not for everyone, however.

Hotel doorman Osvaldo Alves, a slight 74-year-old with thinning white hair and a bright red uniform, was one of the few not watching the match.

“The country always drops everything when the ‘Selecao’ play. We sit there watching football and don’t fix any of our problems,” he said from his post at the downtown hotel where he works.

“It’s a disease Brazil has. Brazilians are just crazy about football.”