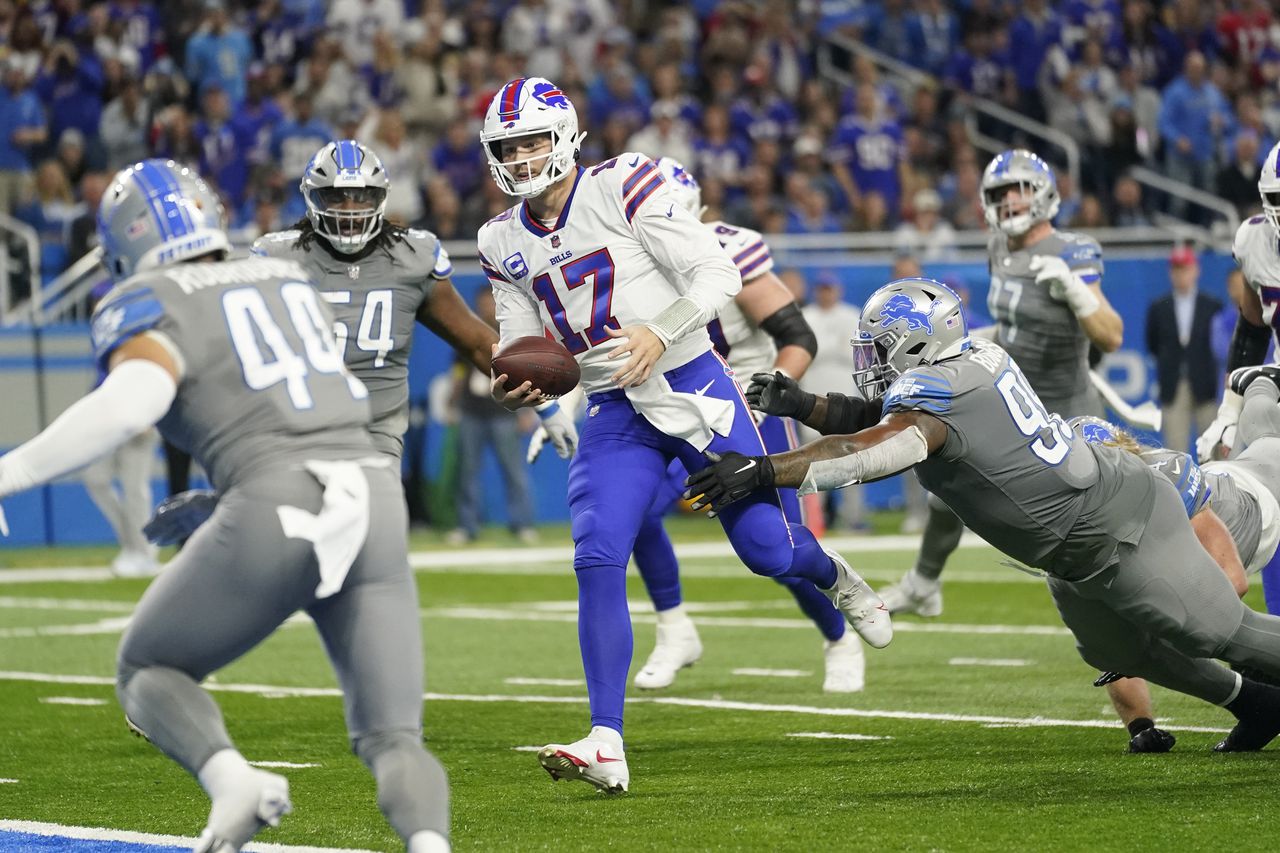 DETROIT — Tyler Bass made a tiebreaking, 45-yard field goal with 2 seconds left, lifting the Buffalo Bills to a 28-25 win over the Detroit Lions on Thursday for their second victory in five days at Ford Field.

Josh Allen set up the game-winning kick by starting the drive with a 36-yard pass to Stefon Diggs and running twice for 12 yards.

Buffalo (8-3) has won two straight to move a half-game ahead of Miami in the AFC East.

The Bills were back in Detroit after the NFL shifted their previous home game against Cleveland to Ford Field because of a winter storm dumping several feet of snow in western New York. They had to work harder for the win on Thursday than they did against the Browns. Bass was 6 for 6 on field goals in the 31-23 win over Cleveland.

Allen threw a go-ahead, 5-yard touchdown pass to Diggs with 2:40 left, but Bass missed the extra point to make it 25-22.

The Lions converted fourth-and-1 from midfield with Amon-Ra St. Brown’s 7-yard end-around to set up Michael Badgley’s game-tying, 51-yard field goal with 23 seconds to go. Badgley missed a 29-yard field goal late in the third and Jared Goff took a sack for a safety in the same quarter and those mistakes proved to be costly.

Allen had a passing and rushing touchdown in the first half, finishing 24 of 42 for 253 yards to more than make up for throwing his 11th interception of the season.

Detroit (4-7) missed an opportunity to win four straight games for the first time since 2016 and lost a franchise-record sixth straight game on Thanksgiving.

Goff was 23 of 37 for 240 yards with 1-yard touchdown pass to St. Brown that made it 14-all late in the first half, and a 1-yard touchdown to DJ Chark that pulled the Lions within three points early in third quarter at 22-19.

Buffalo defensive tackle Ed Oliver forced and recovered a fumble in the first half, leading to Allen’s tiebreaking, 3-yard touchdown run in the second quarter. Oliver also sacked Goff for a safety, three plays after Allen threw an interception at the Detroit 4, to put the Bills ahead 19-14 early in the third quarter.

Bills: Edge rusher Von Miller injured his right knee in the second quarter and was ruled out.

Lions: DE Julian Okwara (elbow) was hurt during the game.

Larry Lage of The Associated Press wrote this story.

- Continue reading below - The World Cup in Qatar continues by starting to outline the picture of the teams that, starting from the...
Read more

- Continue reading below - The World Cup in Qatar continues by starting to outline the picture of the teams that, starting from the...
Read more
Hot News

Models of oil barrels and a pump jack are seen in front of displayed EU and Russia flag colours in this illustration taken March...
Read more
Business