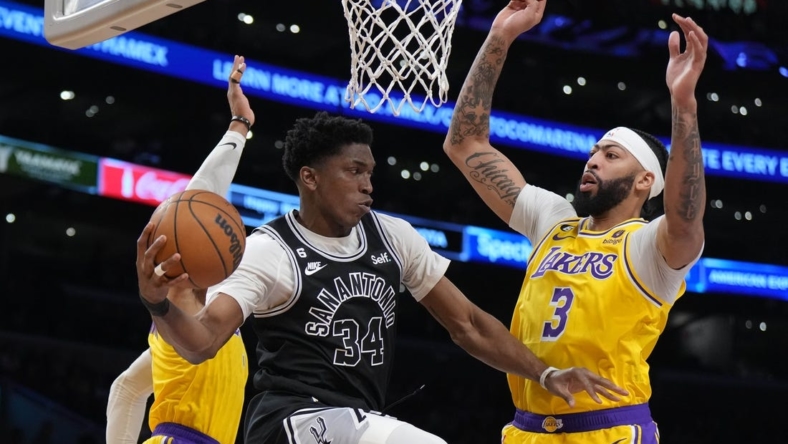 LeBron James amassed 20 points, 11 assists and nine rebounds, Anthony Davis added 21 points and 12 rebounds in his return from a right foot injury and the Los Angeles Lakers earned a 113-104 victory over the visiting San Antonio Spurs on Wednesday.

Rui Hachimura scored 12 points in his Lakers debut after he was acquired in a trade with the Washington Wizards on Monday. Davis played 26 minutes in just his sixth career game off the bench after missing the past 20 games.

Jeremy Sochan added 14 points for the Spurs, who were swept in a season series by the Lakers for the second time in the past four seasons.

Davis rolled his right ankle on a foul by Collins while shooting from beyond half court to beat the buzzer at the end of the third quarter. He made three free throws to bring Los Angeles within 82-81 heading into the final period and returned to open the fourth.

The Lakers took control approaching the midway point of the final quarter with an 11-0 run that was charged by three-consecutive 3-pointers from James, Dennis Schroder and Max Christie for a 99-89 lead with 7:20 remaining.

San Antonio never got closer than eight the rest of the way.

Patrick Beverley scored 18 points and Russell Westbrook had 14 for the Lakers, who went 4-4 over a stretch in which they played seven of eight games at home. Los Angeles now plays seven of its next nine on the road.