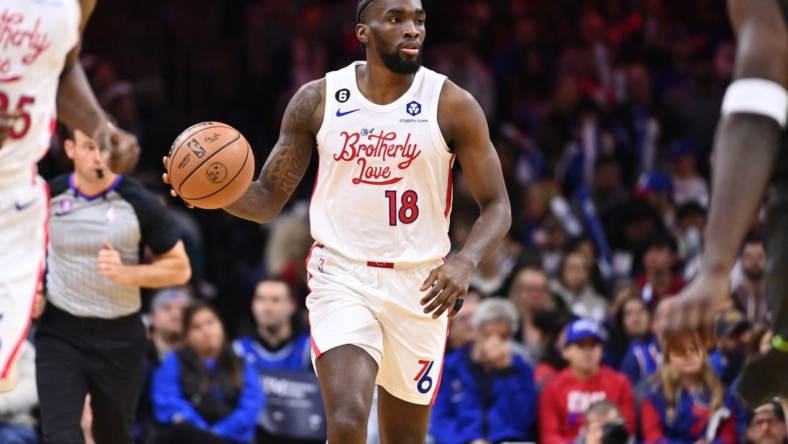 The injury-riddled Philadelphia 76ers look to avoid falling below .500 on the season when they visit the Orlando Magic on Friday.

Philadelphia lost for the second time in three outings with a 107-101 setback to the Charlotte Hornets on Wednesday.

Shake Milton collected 22 points, nine assists and seven rebounds and De’Anthony Melton added 20 points, six boards and four steals in the defeat. The two have meshed well while playing in place of James Harden and Tyrese Maxey, who are dealing with respective foot injuries.

“He is easy to play with, somebody that is so versatile who can do so many things offensively and defensively, he is just really easy to bounce ideas off of,” Milton said of Melton. “When you’re on the court with him and able to catch a rhythm with him, it’s just something about people that really know how to play the game of basketball whether it be cutting, coming off pin downs, passing the ball, playing defense.”

Another player nursing an injury for the 76ers is star Joel Embiid, who is dealing with a left mid-foot sprain. The five-time All-Star is averaging 32.3 points, 10.1 rebounds and 4.6 assists per game.

In Embiid’s absence, Tobias Harris and Montrezl Harrell picked up the slack on Wednesday by scoring 19 and 16 points, respectively.

“I thought we played great,” Philadelphia coach Doc Rivers said. “Honestly, I think we ran out of gas. I didn’t see a negative thing we can say in this game.”

While the 76ers effectively have been stuck in neutral, the Magic have been going in reverse with losses in four of their last five games — including two in a row to the Indiana Pacers.

Star rookie Paolo Banchero sat out those two games and the last seven overall with a sprained left ankle sustained in the fourth quarter of a 134-127 loss to the Houston Rockets on Nov. 7.

Banchero, the top overall pick of the 2022 NBA Draft, returned to practice on Wednesday. His availability for Friday’s game will be determined based on his response to the practice session and treatment.

“I’m feeling good,” Banchero said. “It was good just to get back. It’s been a while. A lot of observing. So, I was just happy to be out there.”

Banchero bolted out to a fast start to his NBA career by averaging 23.5 points, 8.3 rebounds and 3.6 assists in 11 games.

“I was in a good rhythm for sure,” Banchero said. “I definitely felt like I was improving every game (and) just learning. After every game, I was watching a lot of film with the coaches and I just felt a gradual improvement. It sucks that I got hurt in the middle of playing well like that, but I’m looking forward to coming back whenever I do and just picking up where I left off.”

House Speaker Nancy Pelosi (D-Calif.) helps light the U.S. Capitol Christmas Tree. * Click the “Save” button below the video to access it later on...
Read more