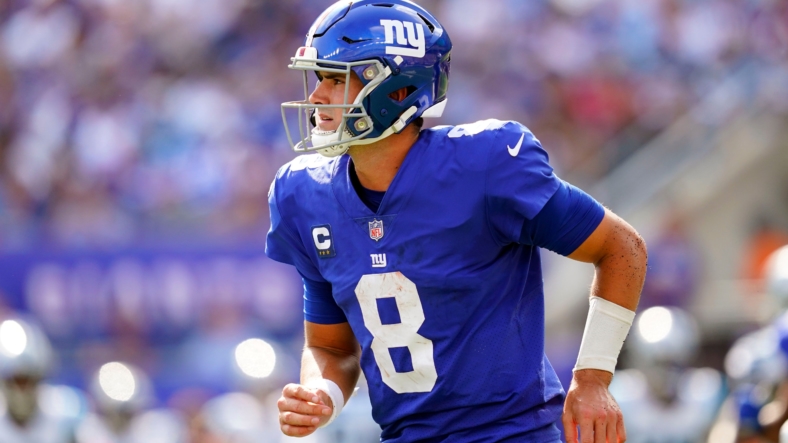 The 2022 season is Daniel Jones‘ last chance to show that he can be a solid NFL quarterback. The clocking is ticking on his time as a member of the New York Giants after the team did not exercise his fifth-year option this spring. And despite the Giants’ 2-0 start, Jones hasn’t shown that he deserves a second contract with Big Blue just yet.

On a positive note, Jones is completing a career-high 70.9% of his passes. But in the season opener against the Titans, he had a fumble and an inexcusable interception in the end zone that led head coach Brian Daboll to have loud heart-to-heart talk on the sideline.

The 25-year-old quarterback didn’t turn the ball over in the Giants’ 19-16 win over the Carolina Panthers on Sunday, but he missed open receivers throughout the course of the game and had a pedestrian performance, completing 22 out of 34 passes for 176 yards and a touchdown. Fortunately for Jones and the Giants, their defense has been outstanding in the first two games and helped propel them to victory.

Now on Monday, he’ll face the Dallas Cowboys who have the best defense Jones has seen this season, and a team that he’s struggled mightily against.

Related: Everything you need to know about the NFL Sunday Ticket

In his four starts against Dallas, Jones has completed 68 out of 112 passes for 759 yards, with three touchdowns with two interceptions, and has lost four fumbles. The Giants have only won one of the four games Jones has started against the Cowboys, and the lone win came in the 2020 season finale. A game in which Dak Prescott did not play due to a season-ending ankle injury.

Prescott will once again not suit up on Monday night and New York is favored to come out victorious. But that’s only if Jones steps up his game. Here are three things Jones must do on Monday night if Big Blue is going to improve to 3-0.

Daniel Jones needs to avoid turnovers at all costs

This is an obvious one as often whoever wins the turnover battle wins the game. Dallas has one of the most opportunistic defenses led by linebacker Micah Parsons and cornerback Trevon Diggs. If Parsons is able to beat tackles Andrew Thomas and Evan Neal off the edge, Jones must be aware of getting strip-sacked and make sure that he doesn’t get lured by Diggs into throwing an interception.

New York Giants and Jones must utilize his legs

The biggest play Jones made in the Giants’ win over the Panthers was his 11-yard run on a bootleg on 3rd and 6 with just 1:50 remaining in the game. That moment sealed the win for Big Blue. The 11-yard run is surprisingly his longest run of the season so far.

With Jones’s speed and athleticism, he needs to utilize his legs more, especially if there’s not an open receiver. Getting a couple of first downs with his legs on Monday night could go a long way toward notching another win for Big Blue.

With the exception of his 65-yard touchdown to Sterling Shepard in Week 1 against the Titans, New York’s passing offense has been relegated to short and intermediate passes. That’s okay if that’s what the defense is giving you, but it would behoove Jones and the entire offense if they take some shots downfield.

Attacking the Cowboys’ secondary deep could lead to a long reception or a pass interference penalty. It will also keep the safeties honest so that they’re not loading up the box in trying to stop Saquon Barkley.

It’s only Week 3 but this is a pivotal game for the Giants.  They’re in a position to create some separation in the standings between them and their bitter rival and to build on their momentum for when they take on the Chicago Bears in the finale of their three-game homestand. However, their fate is resting on Jones, and how he performs on Monday will go a long way in determining his future.

An excellent performance, and a win on Monday night, could give the Giants’ front office the idea that Jones is starting to come around. But another subpar or lackluster performance could lead to what most people are predicting and that is New York will have a new quarterback under center in 2023.