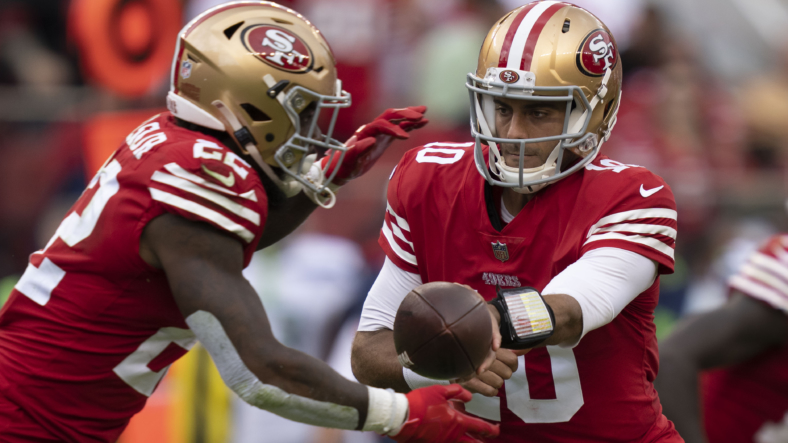 Big things are always expected when it comes to the San Francisco 49ers. When you dial it all the way back to the days of Bill Walsh and Joe Montana setting the gold standard and leaving a long-lasting stamp on the NFL, a Super Bowl or bust mantra has almost always been the mindset heading into each season.

Sadly, just two games into the 49ers’ 2022 campaign, the Trey Lance era has already come to an abrupt halt after the first-year starter suffered a season-ending ankle injury in barely five quarters of football played. While that is no doubt an awful state of affairs, it’s not all bad. Thanks to the best backup quarterback situation in the NFL, Jimmy Garoppolo has retaken the reigns and did so in Week 2 as if he were the starter all along.

Pundits and fans alike can call him a “game manager” or whatever go-to knock is garnering the most engagement on social media, but “Jimmy G” is a proven winner and a beloved presence in the 49ers locker room. Look no further than his teammates’ reaction to Garoppolo’s nail-in-the-coffin TD against the Seattle Seahawks in Week 2.

Related: Everything you need to know about NFL Sunday Ticket

What matters now is how head coach Kyle Shanahan gameplans going forward with “Jimmy G” at the helm and a tough road game against the Denver Broncos on the grand stage of “Sunday Night Football” this Sunday.

San Francisco 49ers need to lean ALL their weapons

It’s hardly a one-man show on offense, especially if George Kittle is able to play in Week 3. So between their All-Pro tight end, the Swiss Army knife that is Deebo Samuel, a bulked-up Brandon Aiyuk, Jauan Jennings, and even young playmakers in Danny Gray and Ray-Ray McCloud III, spreading the ball around should not be a problem. Taking advantage of that luxury and staying away from forced throws will be crucial under the lights in Denver.

Despite injuries, the running backs are Jimmy G’s best friend

To the surprise of exactly no one, the 49ers’ injuries are racking up, particularly when it comes to the running backs. Starter Elijah Mitchell is out for two months and promising rookie Tyrion Davis-Price will be missing at least a few weeks, but — and it’s a big but — Jeffery Wilson, Jr. still exists and has already proven himself as a very serviceable NFL running back.

They also have rookie Jordan Mason and recently acquired Marlon Mack to lean on if needed. Hint: Hand the ball off as much as your burning heart desires, Jimmy.

While you’re busy shouting “thanks captain obvious,” the clear path to getting very good Garoppolo instead of very bad consists of three things: Protecting the ball in a collapsing pocket, knowing when it’s OK to throw it away to avoid sacks, and resisting those all-too-familiar forced throws into double coverage

Those might sound like incredibly basic steps for an NFL quarterback to follow but anyone who’s watched Garoppolo in action knows they are most certainly not. However, when he does do all of this — or even just two of the three — the Niners frequently find their happy place.

Ukraine news: how Ukrainian children adjust to life outside a warzone

Sonya Sazonova may be far away from the constant sounds of explosions, screaming and gunfire that has become the grim norm over in Ukraine,...
Read more
Business